"Revelation": the word to describe a whole year | Word Alive 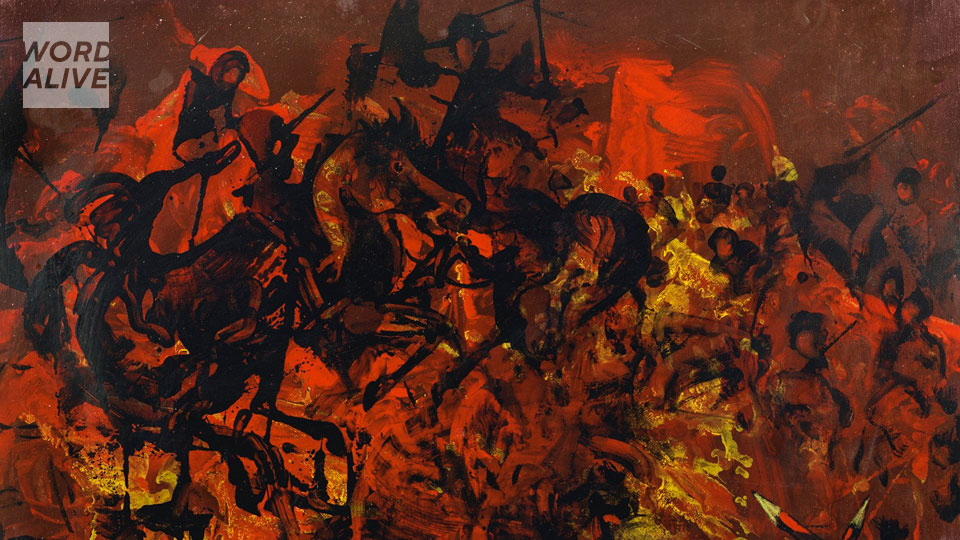 Detail of The Dark Riders by Carle Hessay. Used under the terms of license CC BY-SA 4.0. Source: Wikimedia Commons

"Revelation": the word to describe a whole year

A reflection for the Solemnity of All Saints, Year A

"Do not damage the earth or the sea or the trees, until we have marked the servants of our God with a seal on their foreheads." (Revelation 7:3)

Slow fade into a post-apocalyptic future.  The view pulls back to see a man, scrolls in hand, standing in the middle of a battlefield with demonic forces approaching. Trumpets sound in the background while fire rains from the heavens. With a loud swoop, an angel soars into the scene, passing the man. Cut to black as the title card dissolves to: Revelation; followed by the words “coming soon". This was once my recurring "mental teaser" whenever I thought about the Book of Revelation. However, despite visualizing it within the spiritual-action genre – scored by Hans Zimmer and stylized to look like a Zack Snyder film – I confess that Revelation was my least favourite book of the Bible to revisit. This was because my general understanding – like countless others – was that it prophesied a spiritual war at the end of  the world, and later the final judgement of our souls. Too real. Too scary. Closed the book. Rewatched The Office. But this year, as I contemplate the readings for the Solemnity of All Saints, it's different. The book is open. I am listening. The first step for me to perceive the Book of Revelation as less daunting is to reframe any negative connotations: my associations with apocalyptic tropes – desolation, chaos, death, etc.  This begins with refocusing on the word "revelation" – duh! – which, to my surprise, is the definition of the word "apocalypse". Quick lesson: Apocalypse comes from the Greek word, apokálypsis, which means to lift off the veil, to uncover, to reveal. An apocalypse is a revelation. With my newfound understanding, describing 2020 like an apocalypse no longer feels like an overreaction. It is not the end of the world, but if we abide by its etymological origins (apocalypse being a revelation), this accurately describes the year so far. This is the year our veil of “normality” was lifted to reveal our failings as humanity: “social injustice, inequality of opportunity, marginalisation, and the lack of protection for the weakest” (Pope Francis, General Audience, Catechesis “To Heal the world”). This is the year the holes in our socioeconomic systems were revealed. This is the year police brutality and systemic and systematic racism – specifically against Black and Indigenous lives – in North America could not be ignored. This is the year that classism and privilege were also spotlighted. This is the year the lack of opportunities for immigrants came more into the light. This is the year ageism has become of higher concern. The big reveal of 2020 was not that these issues exist. On the contrary, the revelation of 2020 was that our “normality” was the ignorance we exercised to allow these issues to continue to exist. Scholars are divided on the identity of the audience for whom the Book of Revelation was intended and on its purpose. Some believe that it is directed towards persecuted Christians to give them hope; other scholars believe it is for Christians who allow their beliefs to be compromised by contradicting cultural factors. To creatively paraphrase Robert Louis Stevenson: “[If it] could rightly be said to be either, it was only because [it] was radically both” (The Strange Case of Dr. Jekyll and Mr. Hyde). We must be bold in our faith – not fearing social persecutions – and hold true to God's teachings, especially in this day and age of information and misinformation overload, but the other interpretation is just as important: The Book of Revelation gives hope to the persecuted. That message of hope is what stands out to me when reflecting about this year.  The injustices I mentioned above have existed for a long time. For years my own head has been down, leaving the outcries of "Say his name", "Say her name", "Black lives matter", "Indigenous lives matter" to fall on deaf ears, while disregarding the needs of our elders and other vulnerable groups in our community. For years, ignorance has been our "normality". And shamefully, it took 8 minutes and 46 seconds – the cost of George Floyd's life – for us to finally hear the outcries, to hear our own failings. We have lost so much time, neglecting our brothers and sisters in Christ. Time is valuable and "paralysis by guilt" should not dare take any more of it. We must learn from the past and remember that we are "God’s children now" (1 John 3:2). We must not live in that past and let the lack of progress in our community overwhelm us. We must take solace in the notion that "what we will be has not yet been revealed” (1 John 3:2). It is for us to accept or reject God’s likeness. This is our opportunity to right our wrongs. It will likely be an arduous journey, but the Book of Revelation urges us to persist, for ultimately, Good will triumph over Evil. We just have to start moving forward and never stop.

"These are they who have come out of the great ordeal; they have washed their robes and made them white in the blood of the Lamb." (Revelation 7:14)

We must look towards Christ to model our path, knowing that we are never alone in this journey. We have Jesus, and all the saints, who endured whatever it is we might fear: persecution, death, all kinds of suffering. And ultimately, we have this revelation, this big reveal, this spoiler, this apocalypse: "Rejoice and be glad, for your reward is great in heaven, for in the same way they persecuted the prophets who were before you" (Matthew 5:12). 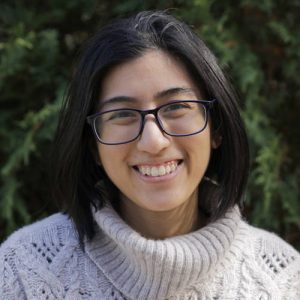