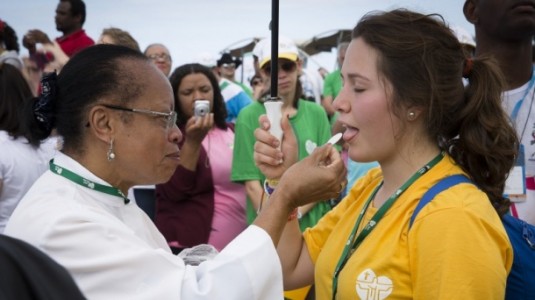 This post is part of a series of reflections by TJP writers on Pope Francis’s recent interview. Full Series List: The Papal Interview: Young Jesuits React and Reflect The Original Interview: At America Magazine

By Jason Welle, SJ
Pope Francis’s interview has many people, not least us here at TJP, jumping for joy, and rightly so. It felt like yet another example of the Bishop of Rome demonstrating by his own actions the positive, loving presence he believes Christianity ought to be in the world.
But not everyone can see it so positively. Writing in the Los Angeles Times, Diane Winston observes:
Yet there is one group more numerous than LGBTs in the church and significantly more neglected, disenfranchised and marginalized — for whom his ministrations fall short.
Who, you ask? Roman Catholic women.
To be sure, he says some important and positive things about women in the Church that haven’t been heard from the hierarchy for a very long time, if ever: “Women are asking deep questions that must be addressed. The church cannot be herself without the woman and her role. The woman is essential for the church.”
Nonetheless, many people, both women and men, felt disappointed with his attempt to engage those questions, as he focused on the importance of Mary as an example of how women’s dignity should not be confused with their functional roles. Yet an emphasis on Mary has frequently been used in the past to restrict womanhood to motherhood.1 Over at Commonweal, Mollie Wilson O’Reilly is troubled by Pope Francis’s use of the phrase “‘feminine genius’…another one of those vague terms that justifiably make feminists suspicious — so often talk of the ‘unique role’ of women seems a polite way of saying ‘stay in your place.’” TJP commenter Anne Murphy puts it this way: There remains some kind of disconnect or dissonance between a beautiful (quite mystical, really) ecclesiology that would have us understand the Church as “mother and shepherdess” and a comparatively crude or inchoate theology/set of ideas about the actual role of actual women in lived ministry and current governance in the Church. Perhaps what frustrates many women the most are comments that come next: “We have to work harder to develop a profound theology of the woman.” Yet arguably, we already have a deep theology of women in the Church; it’s just been buried or criticized without being given due consideration, or relegated to the periphery of theology so it cannot enjoy broad engagement and discourse. Think here of theologians Elizabeth Johnson (She Who Is, ), or Sandra Schneider (Women and the Word). Think too of Catherine LaCugna, Susan Ross, and Jeanette Rodriguez, to name just a few. Nor does that theology begin with academic women theologians in the 20th century — there are numerous examples in the Gospel and other scriptures of women whose roles and interactions with Jesus do not begin from their role as mothers, who challenge and lead in their own right. Take Mary Magdalene, or the Syro-phoenician woman, for example, who challenged Jesus’ initial refusal to heal her child, or Phoebe and Prisca, who served in leadership roles in early Christian communities. Missionary Dorothy Stang was martyred for her work in the Amazon. And this theology is present, too, in women who continue to be present as witnesses and teachers and disciples through the whole sweep of Christian history, from the so-called virgin-martyrs2 of Rome to the towering intellect of Hildegard of Bingen3 to the church-reforming zeal of Catherine of Siena to the powerful witness for justice of Dorothy Day or the women missionaries martyred in Latin America in the 20th century. So while there are reasons to cheer Pope Francis’s recognition that “the challenge today is this: to think about the specific place of women also in those places where the authority of the church is exercised for various areas of the church,” there’s also a legitimate frustration in that it is so difficult for us to reclaim a theology of women at all the places, now and in history, where women already exercise their discipleship. If it reflects his thinking, it serves as a hopeful balance to some of the other concerns expressed here. But for now, it may be that we can only hope – noting that hope, for the Christian, is a powerful force – that he’s proposing taking the leadership of women in the Church beyond novelty and into ordinary and substantive practice. --- Cover photo: CNS Photo/Tyler Orsburn Photo: brasildefato1 via Flickr