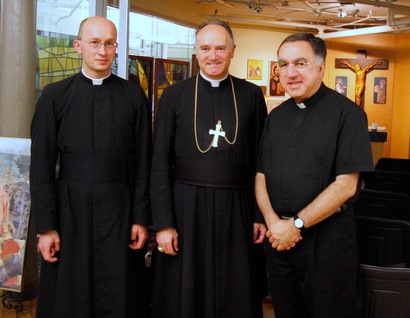 Here below is the full transcript of Fr. Thomas Rosica's interview with Bishop Bernard Fellay, Superior General of the Society of St. Pius X. Watch the half-hour interview this Sunday on Witness or view the entire program streaming online here. Fr. Rosica (right) and Bishop Fellay (centre) are pictured here with Fr. Jürgen Wegner (left), District Superior of the SSPX in Canada. Witness airs this Sunday at 8:30 PM, repeating the following Thursday at 8 PM. A separate French interview with Bishop Fellay airs on Témoin this Monday at 8 PM, repeating the following Saturday at 7:30 PM. (All times Eastern) Find additional broadcast times here.