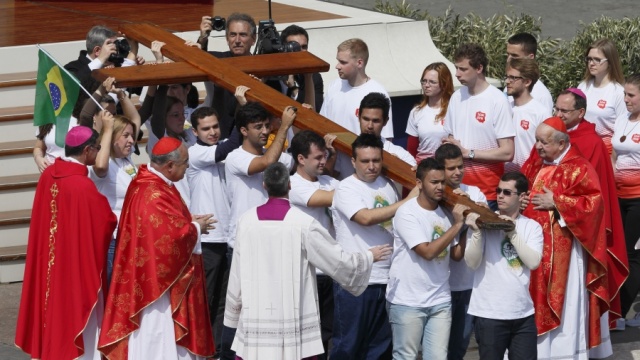 Last week I shared a bit of my WYD experience and how this event can (and does) change so many people's lives. But many are not familiar with the history of World Youth Days nor with the reasons behind it. During the pontificate of Paul VI, the Church was trying to figure out how to make this whole youth thing make sense. Someone suggested inviting youth to Rome for an “encounter” but nothing ever came of it. There is also a rumour that John Paul II, after being elected Pope, was on retreat near Assisi during a youth gathering called “Giovanni Verso Assisi,” “Youth Towards Assisi”. I was in Assisi for this same gathering in 2001 – there were some 3000 young people from all over Italy. It was like a mini-WYD. They say that this original gathering gave JPII an idea. As it turns out, in 1984, the Holy Year of Redemption, JPII invited youth from around the world to come to Rome, to St. Peter’s Square, for Palm Sunday. Skeptics predicted that perhaps some 30 kids would show up and publicly proclaim their faith. On the contrary, some 300,000 came! On this occasion, John Paul II gave the youth of the world a simple wooden cross – the cross that has become the symbol, the Olympic torch, for World Youth Days. If we are to deacon-struct WYD, we have to start with the Cross. For one year before each WYD, this Cross travels around the host country visiting schools, jails, malls, old-age homes, nightclubs... those places which most need the Cross. Here in Canada, the Cross went from east coast to west coast, to north coast, travelling by car, truck, bus, plane, boat, sailboat, canoe, snowmobile and helicopter, and went into the most remote communities in the country – even those places where there are no roads. The WYD Cross brought the country together in ways that nothing else had before. For the last 40 days of the Cross’ journey, it was brought on foot, from Montrèal to Toronto. While it traveled through towns and villages, groups of young people, adults and children would join on the pilgrimage – they would take turns carrying it – praying with it. The Cross is one of the reasons for WYD. But not so much the Cross that reminds us of the suffering and passion. Instead, the Cross without which there is no redemption, no salvation and no resurrection! 1985 was declared the International Year of Youth by the United Nations. John Paul II thought that it would be appropriate to, once again invite the youth back to Rome. This time many more came. Why? What did that old man have that attracted the youth so much? John Paul II was the only living person who could gather so many people in one place – no rock star has been able to gather so many people at one time. In Toronto 800,000 came to celebrate the Closing Mass with the Holy Father. That day, Downsview Park became the 7th largest city in Canada. For WYD 2000 in Rome, during the Year of the Jubilee, 2 million people attended the Closing Mass. In the Philippines in 1995, 5 million people were with JPII for the WYD Final Mass! Popes Benedict and Francis definitely continued with this ability to gather youth: 1.5 million were with Pope Benedict at the Final Mass in Madrid and 3 million gathered in Copacabana Beach for the Final Mass with Pope Francis for Rio 2013. 2.5 million are expected at the Final Mass in Krakow. Nowadays with Pope Francis we normally here the cheers of "Viva el Papa". Many of us can remember the shouts of "Benedetto" but do you remember the young crowds cheering, “John Paul II, we love you”? Often he would respond, “John Paul II, he loves you.” John Paul II used to say that he loved young people. I think it was much more. JPII understood that the youth are not the Church of tomorrow: They are the Church of today. When he met them, he encountered the Church of today. At the same time, the youth, when meeting with the Pope, with any Pope, meet with the hierarchical Church and can connect with the tradition and structure of the Church. That’s another reason why young people come to WYD: to meet with the Pope and with the Church. The motto of World Youth Days since its beginning has been The Pope and Young People Together. So at WYDs we have a meeting of the Lay Church with the Hierarchical Church, under the Cross. Next week, let's look at the pilgrimage aspect of WYD. - Photo Credit: Young people from Brazil, left, pass on the World Youth Day cross to youths from Poland, right, at the conclusion of Pope Francis’ celebration of Palm Sunday Mass in St. Peter’s Square at the Vatican April 13. (Photo: Paul Haring/CNS)