Deacon-structing WYD: The Kingdom of God 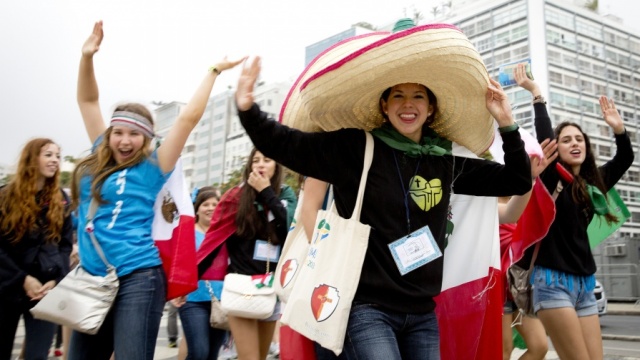 Often, when I speak to young people, I’ll start by asking where they are from: Is there anyone here from Ottawa or Quebec? How about anyone from the States? This usually gets the groups cheering as I call out their home town. But when I ask, “who is from the Kingdom of Heaven?” not everyone puts up their hand. And that’s exactly my point: Not all of us think we are worthy to belong to the Kingdom of Heaven. Let me explain: If we are all sons and daughters of God, made in the image of God, then, by definition, we are members of the family of God. And if we are members of the family of God, then we belong in the Kingdom of God. The Kingdom of God is the Kingdom of Heaven. Get it? And who lives in the Kingdom of Heaven? The Saints, right? So, if we belong to the Kingdom of Heaven, then, by logical deduction, we are saints. All of us! It’s true. You may not like the idea that you are being created to be a saint, but you are. The calling is not to be something that we are not; the calling is to say “yes” to that for which we are created. Saint John Paul II already told us: “Do not be afraid to be the saints of the new millennium.” Me too. I’m just an ordinary Catholic, from an ordinary Panamanian family. I belonged to a youth group and Church choir. Even when I left home at age 16, I continued to go to Mass on Sundays. I never really strayed from the Church. I can’t say that I understood Church teachings, but I never really doubted the Faith. Still, like many other “ordinary” Catholics, although I’d always been in the Church and I always “followed” Jesus Christ, I had never had a real close personal encounter with Jesus Christ. Well, I'd had them, I just hadn’t recognised them. Why? Because having a personal encounter with Christ almost always leads to a calling. Yes, I'd had encounters, but none had really led to a calling, until I came to work at the National Office for the World Youth Day 2002 in Toronto. I was the Artistic Director for WYD 2002, in charge of all artistic programming for the event: all music, dance and dramatic expression. For the Youth Festival we coordinated the participation of almost 200 groups, from 35 different countries, in eight different languages, with a total of some 400 performances. I also coordinated the production of the official WYD 2002 Souvenir CD album and all the dance and music for all the main events with Pope John Paul II. It was an unforgettable experience filled with many blessings. I’ve never been so busy nor have I slept so little! But, at the same time, I never felt super stressed, nor that the whole world was caving in. I never lost hope. I always knew that this was God’s work and that He was in charge. And it was in that small detail, that something inside of me changed. I worked 20 months for the WYD 2002 Office – for me that was a time of many challenges and frustrations, yet at the same time, of incredible peace and joy. My experience with WYD was one of the Beatitudes: Blessed are the frustrated, those who have no money, those who don’t have enough time in the day and too much work to do... Blessed are those who are hungry. Blessed are those who got lost and never made it to their Catechesis sessions – those who didn’t eat because the food ran out, those who were dirty, wet, sleepy, cold or too hot, suffering from sun stroke – Blessed are those who were dehydrated... Those who had to raise thousands of dollars to buy a plane ticket only to have their visa applications denied... Blessed are they, for the Kingdom of God is theirs. In just about a month, hundreds of thousands of young people will be traveling to Krakow, Poland for the 30th WYD. But why? Why spend so much money and travel so far? Why go through the discomfort of crowds, only to end up so far away from the stage or a screen and not see anything – why get soaked in the rain and be hungry? Why all this suffering? Why were we called to “make the streets resound with the joy and love of Christ”? Can’t we be salt and light right here at home without going to World Youth Day? Over the next few weeks I will be sharing with you why World Youth Day came about and why it is so important for our Church, so keep coming back. Next week, "The Beginning." - Photo Credit: Mexican pilgrims march down Atlantic Avenue along Copacabana beach for the the opening Mass of World Youth Day in Rio de Janeiro July 23, 2013. (CNS photo/Tyler Orsburn)