Why cherry-picking the Bible is not an option for Catholics 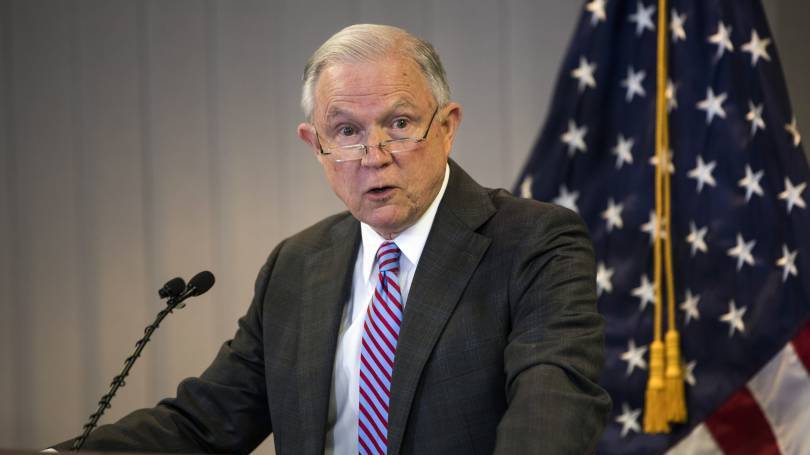 CNS photo/Jim Lo Scalzo, EPA
We all know it’s true: Christians use particular verses from the Bible out of context to defend their own positions and actions. So, while it was disturbing to watch US Attorney General Jeff Sessions a few weeks ago cite Paul’s letter to the Romans to defend his department’s policy of separating immigrant parents and children at the southern US border, it wasn’t surprising. Sessions plucked a passage from Romans 13 which states, “Let every person be subordinate to the higher authorities, for there is no authority except from God, and those that exist have been established by God” (Rom 13:1). Countless political commentators, faith leaders, and Bible scholars quickly rebuked Sessions’ selective reading, pointing out that in the same chapter Paul insists that, “love is the fulfillment of the law” (Rom 13:10). The rebukes were certainly warranted, but the whole controversy points to a deeper problem in the Christian churches, including the Catholic Church: most Christians today do not know how to interpret the Bible.

What’s wrong with a literal interpretation?

Some Christian communities interpret the Bible literally, an approach called “fundamentalism.” For decades the Catholic Church has denounced this approach. Joseph Ratzinger, later Pope Benedict XVI, was one of the Church’s strongest proponents of biblical literacy in recent memory and did much to propagate an informed, faith-filled, and scholarly approach to biblical interpretation. As Cardinal and head of the Pontifical Biblical Commission, for example, he oversaw the publication of an official document entitled The Interpretation of the Bible in the Church in 1993. In it, the commission warned of the danger of fundamentalism, which does not accept any systematic approach to interpretation:

“Fundamentalist interpretation starts from the principle that the Bible, being the word of God, inspired and free from error, should be read and interpreted literally in all its details. But by "literal interpretation" it understands a naively literalist interpretation, one, that is to say, which excludes every effort at understanding the Bible that takes account of its historical origins and development… The fundamentalist approach is dangerous, for it is attractive to people who look to the Bible for ready answers to the problems of life. It can deceive these people, offering them interpretations that are pious but illusory, instead of telling them that the Bible does not necessarily contain an immediate answer to each and every problem… Fundamentalism actually invites people to a kind of intellectual suicide. It injects into life a false certitude, for it unwittingly confuses the divine substance of the biblical message with what are in fact its human limitations.”

The key takeaway here is that biblical fundamentalism is dangerous, since it is void of any established interpretive methodology. It is ahistorical and depends only on the interpretive whims of the person(s) using a particular Bible verse for their own purposes. That appears to be what AG Sessions did, and it runs against the more nuanced and scholarly approach in the Catholic Church.

So what does the Catholic Church teach?

There are many important Church documents on proper biblical interpretation, based on the tradition of the Church and the most up-to-date scholarship. But the Catechism of the Catholic Church is a good place to start. Paragraph 109 states:

“To interpret Scripture correctly, the reader must be attentive to what the human authors truly wanted to affirm, and to what God wanted to reveal to us by their words.”

This guideline is clarified in the following paragraph:

“In order to discover the sacred authors' intention, the reader must take into account the conditions of their time and culture, the literary genres in use at that time, and the modes of feeling, speaking and narrating then current. For the fact is that truth is differently presented and expressed in the various types of historical writing, in prophetical and poetical texts, and in other forms of literary expression.” (110)

In other words, the Bible is a library of complex literature. It should not be read literally without considering the various linguistic, literary, socio-cultural, religious, and historical variables at work. This method of broader textual analysis is called the “historical-critical method”. To interpret the Bible correctly, this interpretive legwork must be done, so that the real intention of the author and the unity of the whole of Scripture are considered. The fact that we can read the Bible in our own language does not negate this crucial interpretive legwork. In his first exhortation Evangelii Gaudium, Pope Francis wrote:

“The biblical text which we study is two or three thousand years old; its language is very different from that which we speak today. Even if we think we understand the words translated into our own language, this does not mean that we correctly understand what the sacred author wished to say.”

With this in mind, we can see why cherry-picking Bible verses for our own purposes can easily misrepresent what the biblical authors intended to communicate.

Where do we start?

Bible scholarship can be overwhelming and highly technical. But knowing even a little bit about the Church’s approach to interpreting the Bible can provide a solid foundation for escaping the kind of fundamentalist trap AG Sessions and others fall into. The Catechism is the best place to start (paragraphs 101-141), as it includes references to the most authoritative teachings, Vatican II’s Dei Verbum in particular. From there, consider purchasing a one-volume Bible commentary, like the New Jerome Bible Commentary, or a Catholic study Bible which provides essential contextual information. Catholics today have a responsibility to be biblically literate. It’s quite ironic that many people of faith, who base their entire lives on the revelations articulated in an ancient collection of books known as the Bible, would not know how to properly interpret or speak intelligibly about its contents. Understanding what the biblical authors really wanted to communicate in a particular context is not only important for speaking credibly about the Christian faith today, it’s important to avoid cherry-picking Bible verses to defend our own interests and dangerously misrepresenting the biblical authors, even skewing divine revelation, as Ratzinger warned. As for AG Sessions’ citation of Romans 13 in defense of separating immigrant parents and children, the Catechism states unequivocally that, “The events reported in Scripture ought to lead us to act justly” (117).