Why Am I Pro-Life?

I was at an abortion debate recently and even though the pro-life speaker made it really clear that his position had to do with the fact that he believes that an unborn human being is still a human being, a human person and as such, deserves the same rights and freedoms as any other human being, there were several women in the audience who kept accusing him of being against women’s rights. They also claimed that as a man, he had no say. I also felt that way: that as a man, I don’t have a say because this is a “woman’s issue.” 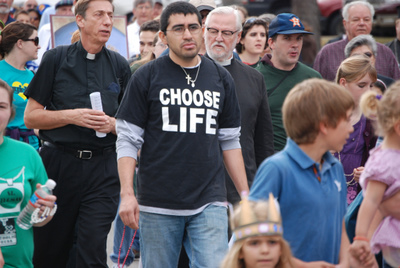 Then I read a pro-abortion article saying something about "pro-lifers wanting to make all uteruses the property of the state."  That seems to me to be the most ludicrous statement, yet, the people who make this claim are serious. They really feel threatened by the idea that abortion may be considered a crime. It made me think how I would respond if someone asked me why I was anti-abortion. It seems to me to be very simple. Despite what some people claim, the pro-life movement is not anti-women, or anti-women’s rights. We believe that all human beings have inherent rights and freedoms. We also believe that a human being becomes a human being from the moment of conception, or fertilization. So, it’s not that I don’t think a woman (or anyone, for that matter) can’t do as they wish with their own body. I just am not convinced that an unborn child is part of the woman’s body. A few questions: Is an unborn child a human being? Well, yes – it is a member of the human species. Is an unborn child alive? Yes. It is growing and developing from the moment of conception. Is an unborn child a separate human being than the mother? Yes. From the moment of conception, this new human being has its own DNA, its own genetic code (23 chromosomes from the father and 23 from the mother, adding up to 46), completely separate from the mother. That’s how we differentiate one organism from another: they have their own DNA. I heard once that this argument was flawed since twins share the same DNA. True,  twins (and triplets, etc.) may share the same exact DNA (in the case when the egg splits after conception – and thus both parts are fertilized by the same sperm – so we’re talking about identical twins), so two separate organisms can share the same DNA. But it has never been recorded in scientific history, that one same organism can have two different DNAs. This is what some people claim is the case with a pregnant woman: that in the earliest stages of pregnancies, she has two different DNAs – one for her and one that is limited to the new organism growing inside her uterus. It doesn’t work that way. So – at this point, I’m pretty sure that an unborn child, from the moment of conception is a living human being that is a separate being from its mother. It doesn’t have to look human – it has all the 'ingredients' and powers that a human being has. Other people claim that life begins when brain activities begin, or when the blood starts flowing through the veins. These are interesting claims – but for me it’s, again, very simple. I am not going to make that claim. Someone else may be comfortable making that claim: that those with no brain activity, or with less developed systems, are either not human, or not persons or less-than-human. In fact, this is what people who believe in eugenics believe. They, like Peter Singer, head of the bio-ethics department at Princeton, believe that not only is it ok to kill unborn children; it’s ok to kill them after they are born. It’s also ok to kill elderly and disabled people whose lives are no longer “valid” or “productive.” Funny enough, Peter Singer agrees that human life begins at conception. He just doesn’t have much respect for life, period. Peter Singer may be happy making those claims. But I am not. I am not prepared to have the whole disability movement on my back for suggesting that their lives are less-valuable or that someone with an extreme disability or under-development is not a human person. Some people claim that even though life may begin at conception, personhood doesn’t; that personhood begins later. Pro-lifers don’t think that there is a difference between a human being and a human person. Have you ever met a human being who is not a person? And so, since I am not willing to make the claim that someone who is not fully developed is not a person, or less than a person, and as such should not have the same rights and freedoms as everyone else, or the protection of the state, I can only make the only other available claim, which is that all human beings, no matter what their level of development, their environment, their level of dependency or their size, no matter their gender, sexual preference, their religion, their skin colour, race, ability, status, actions, beliefs, infirmities, or their age, are valuable human beings, human persons, with inherent rights and freedoms – and their personhood begins when life begins: at conception. This is why our name is ‘pro-life’. We believe that all human life is valuable and as such, we should respect it. And I don’t need to be a woman to believe this. We are not against women’s rights. A woman can do as she wills with her own body, but with the body, and life of another separate and distinct human person, she cannot. No one can. And our laws should protect those vulnerable, innocent human beings who have no one to protect and defend them. -