Who will take ecumenical dialogue to the next level? 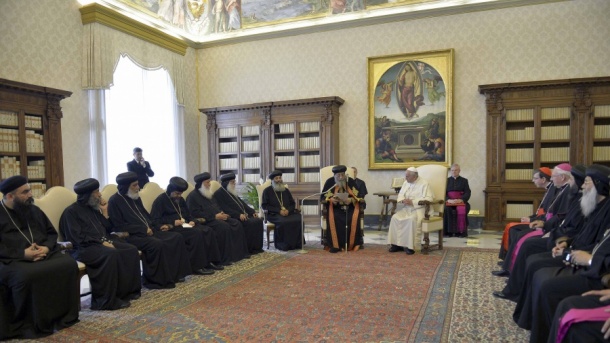 CNS Photo: Pope Francis meets with Pope Tawadros II of Alexandria, Patriarch of the Coptic Orthodox Church, during a private audience in the pontiff's library at the Vatican May 10, 2013
By Sebastian Gomes
Last week I was at a parish in Vancouver giving a talk on Pope John XXIII in preparation for his canonization in April of this year, and a very important question was raised by one of the priests concerning ecumenism today.
Let me give some background information.  The talk focused primarily on the life of Angelo Roncalli: his spiritual development, his rise in the church’s diplomatic corps, and his unforeseen election to the papacy in 1958.  He is best remembered, of course, as the pope who convoked the Second Vatican Council, probably the most significant religious event of the 20th century.
When Pope John made the first public announcement of his intention to call a council on January 25th, 1959 he expressed his desire that the Council not only be for the Christian faithful, and that the church invite “the separated Communities to seek again that unity for which so many souls are longing in these days throughout the world.”
Once the preparatory work began for the Council, ecumenism was brought to the fore.  Pope John established the Secretariat for Promoting Christian Unity and insisted it have the same status as the other Commissions.  Over 150 ecumenical delegates attended the Council from 1962 to 1965 and they were given prime real estate in St. Peter’s Basilica, directly across from the Cardinals.
If you’re familiar at all with the history of Vatican II, you know that the initial schemas (draft documents) presented to the bishops during the opening session were thrown out because they simply reiterated the status quo.  What most people don’t know is that ecumenical motivations played a pivotal role in this decision.  The initial schema on “the Sources of Revelation,” for example, had to be completely revised because the bishops felt it would be a roadblock to deeper and more meaningful dialogue with non-Catholic Christians.
By the end of the Council, the Catholic Church had completely updated its position on its “separated brothers and sisters.”  Dr. Oscar Cullmann, a prominent Protestant observer, noted that “new ground has been broken.”
Certainly we can say that something new happened at that historic meeting.  Over the past fifty years the dialogue has continued, but the hurdle of full unity remains to be overcome.  In light of this, people tend to ask: where do we go from here?  After my talk on Pope John, a priest of the Vancouver diocese raised another question that should probably get more attention, namely: who is capable of taking ecumenical dialogue to the next level?
Throughout my talk I had noted the profound similarities between Pope John and Pope Francis.  And given that Francis is shaking things up at all levels of the Catholic Church, who’s to say he won’t launch an ecumenical rocket?  I immediately responded that Francis is probably the only person capable of pushing the dialogue forward with any decisiveness, and I noted his conscientious emphasis on synodality over papal primacy since he was elected.
I returned to Toronto and continued to ponder this question.  Then I recalled a meeting I had attended of the Ontario Bishops’ Assembly for Ecumenism and Interfaith Dialogue in November of last year.  Bishop Don Bolen of Saskatoon was the main presenter at the seminar, himself a great advocate for ecumenical dialogue having served on the Pontifical Council for Promoting Christian Unity from 2001-2008.
In one session Bishop Bolen drew our attention to the Pope’s Apostolic Exhortation Evangelii Gaudium that had just been published that month.  In chapter four, section IV entitled Social Dialogue as a Contribution to Peace, Francis addresses the current state of ecumenical dialogue in the context of evangelization writing that Catholics, “…must have sincere trust in our fellow pilgrims, putting aside all suspicion or mistrust, and turn our gaze to what we are all seeking: the radiant peace of God’s face.” (Evangelii Gaudium, 244)
The Bishop astutely pointed out that this language of “sincere trust” was not attributable to the papacy until now, and suggested that even a small development – like such a change in tone or emphasis – can make a world of difference going forward.  Coming from someone who has worked so close to the engine room, his further observation that, “We are seeing this papal teaching develop before our very eyes,” is no small thing.
It is still early in Francis’ pontificate to speculate about what will happen on the ecumenical front.  But nobody doubts the sincerity of his words or the decisiveness with which he means to act.  His trip to Israel in May, where he and Ecumenical Patriarch Bartholomew I will commemorate the 50th anniversary of the historic meeting of their predecessors Paul VI and Athenagoras, will be worth paying close attention to.
In our day-to-day lives as Christians, it might seem like everything is static.  Dialogue takes a long time to bear fruit.  Still, the work for Christian unity moves forward and we should never presume that ground-breaking shifts – such as we experienced at Vatican II – can’t happen.  We also can’t forget the remarkable similarities, in style and substance, of Pope John and Pope Francis.