Who on earth has authority? | Word Alive 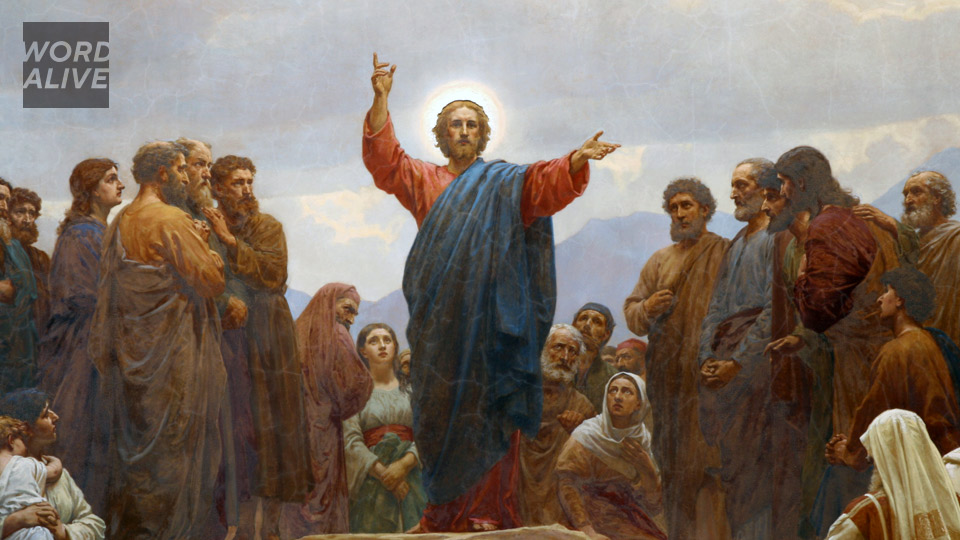 Detail of mural depicting the Sermon on the Mount in St. Matthew's Church in Copenhagen, Denmark (Source: Wikimedia Commons)

Who on earth has authority?

A reflection for the Fourth Sunday in Ordinary Time, Year B

More than once in my life, I have been described as naïve. The label comes with the territory – my small town, prairie girl upbringing, quiet nature, and devout practice of the Catholic faith are easily interpreted as someone who doesn’t know any better. Particularly when I was a young journalism student in Toronto many years ago, my conservative lifestyle made it easy for worldly classmates to dismiss my opinions as uninformed, foolish, or narrow-minded. Occasionally, my perceived oddities would be considered a source of information, and I would be asked to share my faith perspective. One classmate in particular began asking serious questions about the Catholic Church and my relationship with God. His intensity convinced me this wasn’t about an assignment anymore, and I wondered what was stirring in his heart. Then one Friday night, classmates gathered for a house party, and, made brave by his beverage choices, he unleashed an angry blow of hateful accusations against my life, my experiences, my choices. His face was ugly with rage as he turned my words against me. I don’t remember what made him so angry or even what he said. But I do remember crying, and I do remember leaving. I realized then that, yes, I was naïve, but not for the reasons my classmates thought. So content in my faith, I had never considered that someone could find it offensive. I left that party shaking with the shock of that revelation but also carrying immense sadness that I had failed somehow. While I had no illusions that God had called me to be a prophet, how could I have been such a poor witness? Where I had conviction, I lacked authority, and any truth I spoke was either cast aside with a shake of the head or trampled by anger and vicious judgement. In today’s readings, we hear a different tale. Deuteronomy introduces the people of Israel to the idea of a new prophet, but they had asked for it. They were looking for an authority to tell them what to do – how exactly to love the Lord and keep His commandments – but, unwilling, unable, to look in the eyes of God, they needed the direction and instruction softened by a go-between. The answer to their prayers was this:

“The Lord your God will raise up for you a prophet like me from among your own people; you shall heed such a prophet.” (Deut 18:15)

Then, in the Gospel of Mark, we read of the beginning of Jesus’ ministry with his disciples. Together they enter into the synagogue and Jesus begins teaching.

“They were astounded at his teaching, for he taught them as one having authority.” ( Mark 1:22)

He spoke not as a scribe reciting text but as someone living and breathing the word. And the impact of this, as he rebuked and drove out an unclean spirit, was strong.

It is hard to imagine, in the society that surrounds us today, that level of excitement regarding authority. No one likes to be told, or even receive the mere suggestion, that they could or should be living their life differently. Mainstream society lives by a theology of “be kind”, but to whom and on what terms is open for debate but not instruction. World leaders and police forces misuse or abuse their power. Division reigns; chaos peeks around the corner. Confusion, mistrust, and conspiracy theories have chipped away at our pillars of authority, leaving only a crumbling structure that threatens to topple. Instruction and advice is constantly challenged or belittled or met with rage. So who is right? How can we possibly know? Who on earth has authority? Thankfully, no one. No one on earth has final authority. In our lives and our actions, we can only point to the one who does. Like the prophet in Deuteronomy, who delivers the message in a way people can hear; like Jesus in the synagogue, who shares the living message of his father in Heaven; we must live and breathe and do and say the word of God. Twenty years ago, wrecked by a confrontation, I could have shut up and sat back. But I showed up in class the following Monday the same person I had been the past Friday. I knew who I was, what I believed, and where I was heading. Then, and today, I cannot and will not change to appease an angry world. I am not a prophet. I am certainly no authority. No one needs to listen to me (except my children! I would like them to listen to me). But in my words and deeds, I hope I can demonstrate to others that there is an authority. With reassuring hopefulness, we don’t have to have all the answers. We just need to know, in confidence, that someone else does.

Gillian Kantor is a stay-at-home wife, mother, and writer. She was the producer of the Salt + Light TV program, Mothering, Full of Grace, and the writer of the documentary, A Woman’s Voice.