Who am I? Asks Pope during Palm Sunday homily 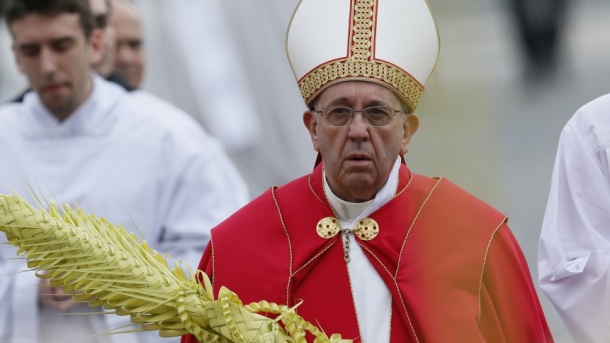 On Palm Sunday, April 13, 2014, in an unscripted, extremely moving, Ignatian-style homily, Pope Francis invited the crowd of over 100,000 people to enter into today's passion story from Matthew's Gospel and ask some very personal questions of our own roles in the Gospel story.
Here is the Vatican's official English translation:

CELEBRATION OF PALM SUNDAY OF THE PASSION OF THE LORD
HOMILY OF POPE FRANCIS
St. Peter's Square
29th World Youth Day
Sunday, 13 April 2014
This week begins with the festive procession with olive branches: the entire populace welcomes Jesus. The children and young people sing , praising Jesus.
But this week continues in the mystery of Jesus’ death and his resurrection. We have just listened to the Passion of our Lord. We might well ask ourselves just one question: Who am I? Who am I, before my Lord? Who am I, before Jesus who enters Jerusalem amid the enthusiasm of the crowd? Am I ready to express my joy, to praise him? Or do I stand back? Who am I, before the suffering Jesus?
We have just heard many, many names. The group of leaders, some priests, the Pharisees, the teachers of the law, who had decided to kill Jesus. They were waiting for the chance to arrest him. Am I like one of them?
We have also heard another name: Judas. Thirty pieces of silver. Am I like Judas? We have heard other names too: the disciples who understand nothing, who fell asleep while the Lord was suffering. Has my life fallen asleep? Or am I like the disciples, who did not realize what it was to betray Jesus? Or like that other disciple, who wanted to settle everything with a sword? Am I like them? Am I like Judas, who feigns love and then kisses the Master in order to hand him over, to betray him? Am I a traitor? Am I like those people in power who hastily summon a tribunal and seek false witnesses: am I like them? And when I do these things, if I do them, do I think that in this way I am saving the people?
Am I like Pilate? When I see that the situation is difficult, do I wash my hands and dodge my responsibility, allowing people to be condemned – or condemning them myself?
Am I like that crowd which was not sure whether they were at a religious meeting, a trial or a circus, and then chose Barabbas? For them it was all the same: it was more entertaining to humiliate Jesus.
Am I like the soldiers who strike the Lord, spit on him, insult him, who find entertainment in humiliating him?
Am I like the Cyrenean, who was returning from work, weary, yet was good enough to help the Lord carry his cross?
Am I like those who walked by the cross and mocked Jesus: “He was so courageous! Let him come down from the cross and then we will believe in him!” Mocking Jesus….
Am I like those fearless women, and like the mother of Jesus, who were there, and who suffered in silence?
Am I like Joseph, the hidden disciple, who lovingly carries the body of Jesus to give it burial?
Am I like the two Marys, who remained at the Tomb, weeping and praying?
Am I like those leaders who went the next day to Pilate and said, “Look, this man said that he was going to rise again. We cannot let another fraud take place!” and who block life, who block the tomb, in order to maintain doctrine, lest life come forth?
Where is my heart? Which of these persons am I like? May this question remain with us throughout the entire week.

After Communion, Pope Francis delivered his Angelus address, during which he extended a special greeting to the participants of the World Youth Days (WYD) organized by the Pontifical Council for the Laity.
He recalled that the next WYD will take place in 2016 in Krakow, Poland, under the theme: “Blessed are the merciful, for they will be shown mercy” (Mt 5,7).
The Pope recalled how 30 years ago John Paul II entrusted the WYD Cross to the youth, exhorting them to “carry it through all the world as a sign of Christ’s love for humanity.”
He also announced that St. John Paul II would be the patron of the next World Youth Day in Krakow. Then a delegation of young people from Brazil handed to a delegation of youth from Poland the WYD Cross, which had stood in Saint Peter’s Square throughout the Mass.
The Holy Father went on to announce he would be paying a visit to Daejeon, South Korea, on August 15 where he will meet with the youth of Asia.
Pope Francis concluded his address by calling us to turn to the Virgin Mother, “because she helps us always to follow the example of Jesus with faith.”
-
CNS photo/Paul Haring