“When in Rome….and when in Calgary…” 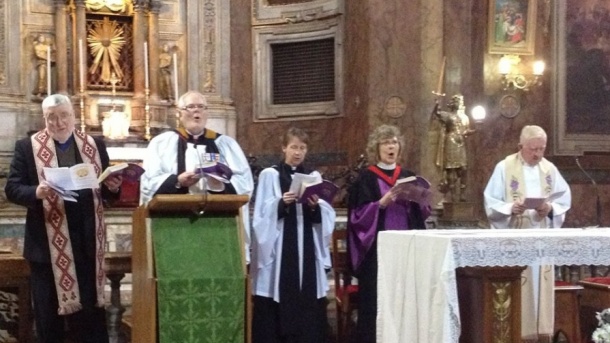 By. Rev. Dr. Karen Hamilton (Canadian Council of Churches)
Given that the focus country of the 2014 Week of Prayer for Christian Unity was, for only the third time in the Week’s one hundred year history, Canada, it was no surprise that I should be invited to preach in a number of places.
It was a great honour to preach in Calgary on January 19th. Twice actually as I was invited to preach in an Anglican parish in the morning and then for the Week of Prayer service sponsored by the Calgary Council of Churches in the afternoon. Ecumenism abounded! And it abounded the next day as well as at a Calgary press conference we launched the new CCC resource on Human Trafficking in Canada and around the world. A dire subject. A calling for all of us who believe that all people are made in the image of God to eradicate this form of modern-day slavery. The resource is available on the CCC website.
Please educate, please act, please pray.
It was also a great honour to be invited to preach at the Week of Prayer for Christian Unity English language service in Rome. Yes, that Rome!
His Holiness Pope Francis was, of course, giving the homily at the Italian Week of Prayer service held in St. Paul’s Outside the Walls. I was invited to preach at the English Week of Prayer service, January 26th in San Silvestro. What an awesome privilege it was to be there with brothers and sisters of all Christian denominations – Roman Catholic, Orthodox, Anglican, Church of Scotland, Evangelical as we prayed, sang, lit candles and heard and experienced the Word calling us forward in our unity in diversity, in our witness to the world. We reminded each other that the Church exists for the sake of the world, God’s world and we strive for unity in order to better manifest Christ, in order to better serve God’s people. The sermon I preached is posted on my Facebook page and is available to all.
As the General Secretary of the focus country for the Week of Prayer, I was invited to be a special ecumenical guest at Pope Francis’ service as well. Ecumenism abounded there as His Holiness prayed at the tomb of St. Paul together with the representatives of the Archbishop of Canterbury and the Ecumenical Orthodox Patriarch. There were many Orthodox, Protestant and Anglican sisters and brothers there in prayer. We sang together, we lifted our hearts together.
And at the end of the service Pope Francis came to greet the ecumenical guests. I was able to tell him who I was, my position and my country. He asked me, as he does, simply and directly, to pray for him and so I have every day since.
After both services, after being special guest for the 125th anniversary celebration of the Pontifical Canadian College, which was where I was most graciously hosted, I was asked by a number of people what colour the Pope’s eyes are. Of course, we could all just look that up. It must be on Google somewhere, if not just evident from pictures. But my answer to the question was my experience – his eyes sparkled and shone with the love of Christ, with the love of the World.
May ours do the same every day, whether preaching in Rome or serving soup in an out-of-the-cold programme or holding the hand of a friend struggling with depression.
Pray for the Pope, Act in unity for the World.
---
Photo Courtesy of Dr. Karen Hamilton