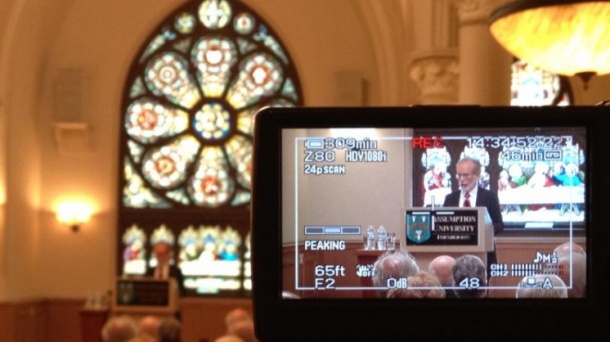 The word "Vaticanista" sounds like it could be a disease, or an Italian delicacy. It is, in fact, the term used to describe a journalist who covers the Vatican. Some might say that it is kind of like a disease; once a young journalist gets a taste of what it means to cover the Vatican, learns its language, customs and culture, it's impossible to get out. Once a Vaticanista, always a Vaticanista.
John Thavis began his career as a Vaticanista in the year of three popes, 1978. He "retired" in 2012...but that just meant he finally had time to write a book about his 30 years covering the Vatican.
The Vatican Diaries was released, providentially, late January 2013. Just days after his book his store shelves, Pope Benedict XVI announced he was renouncing his Petrine Ministry. Thavis was in Rome the day Benedict made his surprise announcement. Had he been tipped off? No. He just knew how to "read" the Vatican and saw the signs pointing to an imminent papal resignation.
Because of his 30 years covering the Vatican, dedicating to helping laypeople decipher what's going on at the heart of the church, Assumption University in Windsor awarded Thavis the Faith and Culture Gold Medal.
The Faith and Culture Gold Medal is bestowed annually by Assumption University on an “outstanding exponent of Christian ideals.” It was established in 1941 to highlight the accomplishments of lay Christians. Past recipients include Jacques Maritain, Paul Martin, Sr., Dorothy Day, Marshal McLuhan, Barbara Ward, Jean Chrétien, John Polanyi, Jean Vanier and Paul Martin, Jr. The medal depicts a hand and a mustard plant symbolizing the human co-operation expected by God for the coming of the Kingdom.