What We Miss on the Way to Work 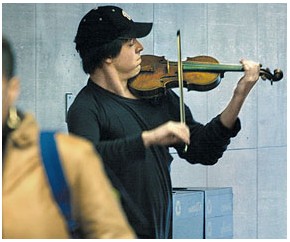 Winston Churchill once said "Men occasionally stumble over the truth, but most of them pick themselves up and hurry off as if nothing ever happened." I recently read about a fascinating social experiment which seemed to confirm Churchill’s cynicism.
On a cold January morning a man sat at a metro station in Washington DC, at the heart of rush hour and started to play the violin. He played six Bach pieces for about 45 minutes. During that time, thousands of people walked passed him without a glance. Only 6 people stopped and stayed for a while. About 20 gave him money but continued to walk their normal pace. He collected $32. When he finished playing no one noticed it. There was no applause or recognition. The thousands of commuters would have been shocked to learn that the “bum” playing in the subway was none other than Joshua Bell, one of the best musicians in the world. He played one of the most intricate pieces ever written with a violin worth 3.5 million dollars. Two days before his playing in the subway, Joshua Bell sold out at a theater in Boston and the seats average $100. Joshua Bell playing incognito in the metro station was organized by the Washington Post as part of a social experiment about perception, taste and priorities of people. The outlines were: in a commonplace environment at an inappropriate hour: Do we perceive beauty? Do we stop to appreciate it? Do we recognize the talent in an unexpected context? As the Washington Post suggested, “If we do not have a moment to stop and listen to one of the best musicians in the world playing the best music ever written, how many other things are we missing?” I though this fascinating experiment has even deeper ramifications for us Christians. The Bible says we have often entertained angels unawares, and while we may not be able to remember any particular angelic visit in our lives, we should nonetheless always be guided by the reality that Christ manifests himself to us through the poor, marginalized and socially outcast. Thousands in Washington walked past a world class violinist. How many countless thousands walked past a simple Jewish carpenter from Nazareth 2,000 years ago? Let us pray for the gift of discernment and for the eyes of faith.