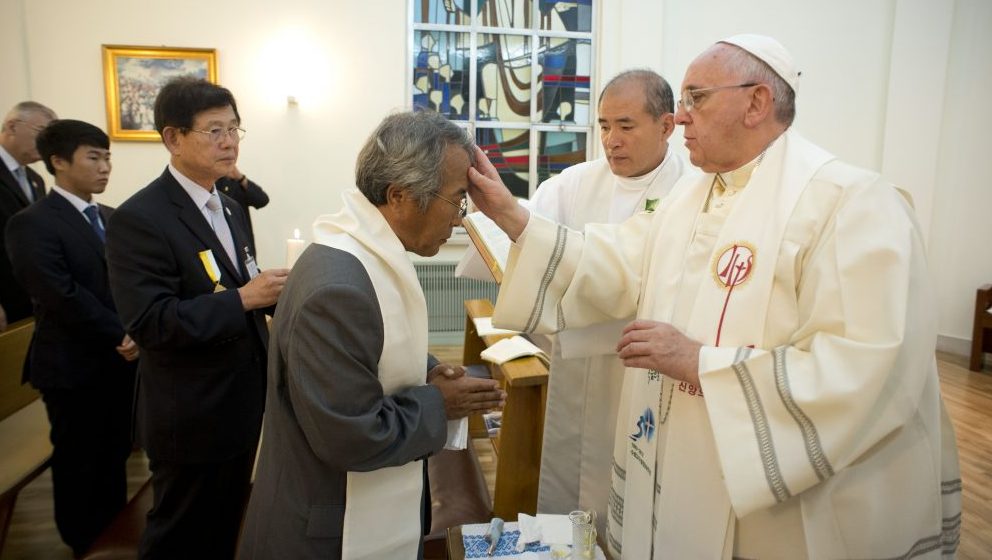 Pope Francis baptizes Lee Hojin, the father of a victim of the April South Korean ferry accident, at the nunciature in Seoul Aug. 17. Lee took the baptismal name Francis in honor of the pope. (CNS photo/L'Osservatore Romano, pool) See POPE-ASIAN Aug. 17, 2014.
Last time we spoke about original sin and salvation. Now let’s look at why we baptise babies. Jesus has promised to be with us in the Sacraments, and in Baptism we are saying that we want to be members of the Church, the Body of Christ. But little babies can’t do that, so our parents make that commitment for us. It makes sense that originally the disciples would teach people about Jesus and when these people believed, they professed a desire to be Christians, so they wanted to be baptised, to symbolise their new life. But don’t forget that in the early Church, it took up to three years to be baptised. The catechumens – those were the candidates for Baptism - went to instruction for a long period of time. That’s what the sponsor was for. And people with questionable professions like prostitutes or gladiators had to change professions (yeah, you couldn’t become a Christian and continue being a prostitute, sorry). If you said that you wanted to be a Christian, you had to prove that you wanted to be a Christian. A simple profession of faith was not enough.

So, why do we baptise babies?

Well, in a way that’s the fulfillment of the marriage promise. Ok, true: we do because of original sin, but also to welcome them into the body of Christ, so they can be claimed by Christ and to give them an identity as members of the Church. That was a promise made at Marriage.

But baptising infants does present us with some problems (and some responsibilities as parents).

In the times of early Christians, when whole families converted and were baptised, even little kids were baptised. But they didn’t have that formation period before Baptism; they had to learn about the faith afterwards. Which is what we normally do with babies nowadays and this is the promise that parents and Godparents make at Baptism (and at Marriage): to teach their children about the faith. And that’s really what makes a Sacrament a Sacrament: the “live-out-ness” of it. Unless we live the baptised life, the life of someone who has accepted Jesus Christ, (and how can we do that if we don’t learn about the Faith), we are not really cultivating those graces received and that little seed which we received, remains exactly that: a little seed.

Christians are not the first to baptise.

Converts from Judaism were sometimes baptised. And the Gospels tell of John the Baptist, who would invite people to repent first (turn their lives around) and then he would baptise them in the Jordan River. For them, Baptism was a sign of the new life these people were accepting. I think it was very much the same for the early Christians: they would wash away the old life and put on the new one.

Christ’s Baptism is not the same as John’s was

Early Christians could wash away sin and the old life because of the power of Christ working in the Sacrament. The Jewish people could only show their desire for that. With the early Christians it actually happened. So they would be submerged in water and then given a white garment to put on symbolising the new life. So in a way, being baptised was like dying in Christ...going under water (the word baptism comes from the Greek baptizein, which means "to plunge") ... And then, rising again with him... literally coming out of the water. These people really believed that something was taking place. In reality something was taking place: the person received supernatural grace, they became a new creation in Christ, they now belonged to Christ, and the person also became a member of the Church, the Body of Christ. St. Paul explains this quite well in his letter to the Romans, chapter 6, verses 3-11. Which is why when Jesus was baptised God’s voice was heard: “This is my beloved Son in whom I am well pleased.” (Matthew 3:17) God was claiming Him as his Son. Jesus didn’t need to be baptised. So why did he? He was giving us an example of what happens at Baptism: we are claimed as God’s own.

Baptism welcomes us into the family of God.

In Baptism, parents “consecrate” their children to God. After Baptism those baptised now belong to God. Which is why we recognise all Christian Baptisms, using the proper formula of baptising in the name of the "Father, Son, and Holy Spirit," and not just the Catholic one: all Baptised Christians are incorporated into Christ by their Baptism. (Catechism of the Catholic Church, paragraph #817-819, 870) Next time, we’ll look at the specifics of the actual ritual of Baptism. This post is part two of a 3-part series on Baptism. Read all of them: part one, part three --