What if we heard Susan Boyle sing before we saw her? 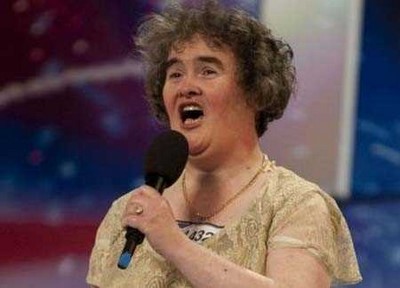 Since currently there are over 40 million hits on You Tube, and Matthew wrote about her yesterday, I probably don't need to introduce Susan Boyle, the underdog story of the day – the woman whom everyone judged and turned out to blow everyone away.
When I finally watched the clip, I did not have any particular reaction. I already knew the end of the story. I knew Susan could sing, but honestly, the way people spoke about it, I thought she’d be horrible-looking and completely ignorant-sounding, which she is not. In fact, my youngest son, looking at the video exclaimed, “She’s not fat.” And, it’s true. She’s not. What was terribly obvious to me, however was how fixed this all was. I may not know much about the actual show, “Britain’s Got Talent” and how they make it – but I do know something about how TV is made. It is very obvious that the three judges, as well as many in the audience (if not everyone), knew Susan could sing. The whole show was presented that way. Had it been a surprise, it would have been shot differently. Just listen to the reactions of the two hosts backstage, throughout. Had people really been surprised at her voice, they would’ve had taken a little longer reacting to it. Instead, as soon as Susan opens her mouth, the audience bursts into an uproar of cheers and applause. Immediately, the three judges produce the biggest smiles ever (and when have you seen Simon smiling?). But more importantly, the cameras capture them. Had it been unexpected, the director would not have known to go to them right away for the reactions. In fact, my initial thought was that those reactions were shot afterwards. I am convinced that the whole eye-rolling-exchanging glances-thing, before she sang, was, if not rehearsed, shot afterwards. I’m serious. Watch it again and look at the way it’s edited. Look at Piers Morgan’s face. Watch when Amanda Holden’s stands up to clap in the middle of the song. Listen to the music crescendo at the end when she’s given the “yes” to move on. That’s reality TV. I wouldn’t be surprised if the show producers, looking to improve their ratings and to guarantee successful CD-sales afterwards (you watch, Susan, whether she wins or not will go on to record an album, produced maybe by Simon Cowell himself and sell millions – in fact, sales would be better if she doesn’t win, but comes in second), went out looking for a “frumpy-looking-every-woman” who could sing. That’s how these things work. (Remember Paul Potts’ performance in the same show last year? He’s gone on to record 2 albums.) How is it that no one knew she could sing? Did she not audition for the show? Surely this performance in front of two or three hundred people was not the initial audition! I don’t buy it. And the dream? Even the song she chose is too obvious. These are some of the words to I Dreamed a Dream, from Les Miz: “I had a dream my life would be, So different from this hell I'm living, So different now from what it seemed, Now life has killed the dream I dreamed.” Is this not part of the whole manipulation thing? In fact, watching the Britain’s Got Talent clip made me react a little bit the same way I reacted when I first saw Les Miz. I felt manipulated. And don’t get me wrong – it’s a great show, with a great message. I love the music. But it’s designed to make people cry and to stand up in an ovation at the end. I refused to stand. I felt manipulated to respond a certain way. And it was the same all three times I watched the show. But honestly… so what? Why would the show producers choose this scenario to boost their ratings? What is it about the underdog, slum-dog-millionaire, story that appeals to people? Or are they really trying to make a point of showing us how judgmental we are? Or are they trying to clean up the image that these shows have of being ruthless and demeaning: let’s give a frumpy woman a chance – and show the world how we are not really that judgmental (just imagine what it would have been like had Susan not been able to sing!) And not to put Susan down – because whether real or not, it is an inspiring and positive story, and she can sing – but when I first heard her sing I thought the same thing I thought when I first heard Andrea Bocelli sing: can he sing? Yes. Is he good, yes? Is he better than a Pavarotti or a Domingo? Not really. Is it worth listening to? Yeah. Is it worth buying a CD? Maybe. Is it worth all the hype? No, it isn’t. Why then, all the hype? Because he’s blind. But his blindness doesn’t make him a better singer. The same with Susan: her ordinariness doesn’t make her a better singer than anyone else in that competition. But perhaps she will win in the end. Why? Because she’s the better singer, or because she’s the ugly duckling? I wonder what the reactions would have been, had we heard her sing first before seeing her (and not coloured by the reactions of the judges and the audience, manipulated by the show’s producers). We would’ve heard a beautiful voice, imagined the face and body of the person to whom it belonged and then been surprised to see the actual owner of the voice? I don’t know. 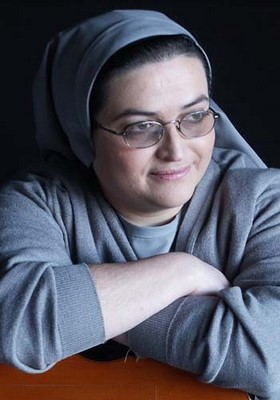 I had the same reaction when I first met Hermana Glenda. I am a bit ashamed to admit this, but I had been listening to a Hermana Glenda tape for about a year or two before I met her. If you don’t know who I’m talking about, she has an angelic voice. Have a listen. It is beautiful. I heard it and imagined a beautiful 18-year-old. I imagined the most beautiful young girl in the world. Who else could have that voice? In truth, Glenda is not 18 and she’s not the typical magazine-cover model. She’s short, stocky and in conversation, a bit loud (and lots of fun). But she has a beautiful singing voice. As far as Hollywood and Broadway go, despite her voice, (and despite Britain’s Got Talent’s new non-judgmental approach) she’d never get cast as the leading lady, only as the stepsister. And the singer who gets cast as the stepsister can’t have an angelic voice. So she wouldn’t get cast at all. That’s the sad reality. The not-so-sad reality is that I know many people who sing beautifully, but are ordinary-looking. I also know many ordinary-looking people who are beautiful people. I also know many gorgeous people who should be modelling, who can’t sing and/or who are not beautiful people. But I know some gorgeous-looking people who can sing very well and some not-so-good-looking people who can’t sing – some of them are nice and some are not nice. Get my point? It’s not about judging or not judging – I think most of us will catch ourselves when we judge – and we do judge all the time. For me, it’s about how we let popular culture shape our lives and our beliefs. If pop culture says it’s ok to laugh at someone, we do. If they say it’s not ok to laugh, then we become all self-righteous. Don’t get your truth from popular culture, because tomorrow, despite all the Susan Boyle-hype about not-judging a book by its cover, those same reality shows will continue being just as demeaning and making fun of people and their dreams. And they’ll still have 40 million hits on You Tube.