What if I was Miss California? 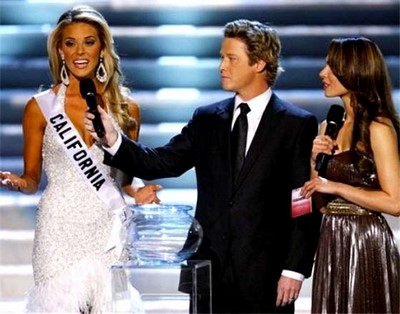 In my old age, I am a bit behind… so I didn’t hear about the whole Miss California, traditional Marriage thing until last week. And when I did, the first thing I thought was, “Perez Hilton is not the same as Paris Hilton?!” Go figure! For someone who grew up in a family that watched the Miss Universe and Miss World pageants faithfully year after year (not to mention the Miss Panama pageant), I’m really letting it slip. So, in case others out there are just as lost as I am: Carrie Prejean is the 21-year-old Miss California who was one of the 5 finalists for Miss U.S.A. two weeks ago. During the portion of the contest when she has to answer a question, she randomly (was it random?) picks a judge, who will ask the question. She picks judge number 8 -- Perez Hilton, born Mario Armando Lavandeira, a well-known gay-rights activist, blogger and trouble-maker (Why is he a judge on this pageant?). Again, as in Britain’s Got Talent, we question whether this was planned or not. The young contest hostess exclaims, “Should we be worried?” Like she didn’t know what the question was going to be. So here is it: Do you believe every State (in the U.S.) should legalise same-sex marriage? Here is what Miss California, a self-professed Christian, responded: “I think it's great that Americans are able to choose one way or the other. We live in a land where you can choose same-sex marriage or opposite marriage. You know what, in my country, in my family, I do believe that marriage should be between a man and a woman, no offense to anybody out there. But that’s how I was raised and I believe that it should be between a man and a woman." And the media feeding-frenzy began. Needless to say, she did not win the Miss U.S.A. crown. She was the first-runner up. But why? It’s not like statistically the majority of Americans do not agree with her. Thirty U.S. States have voted to keep the traditional defition of marriage. Carrie Prejean is not alone in her views. Perez Hilton is in the minority. But the media would have you thinking otherwise. Carrie Prejean was put on the spot. No other contestant got a similar question. Of course she was not prepared for a question like that, but she should be. We all should be. Here’s where I am going: What would I answer if someone asked me that? Would my answer be any different if it was asked on national television? I don’t know, but here’s a start: Even though it’s great we live in a democracy and we have freedom of choice, I don’t think Marriage is a right. Jean Vanier is famous for saying that all human beings have the right to be loved and to know that they are loved – but we don’t have a right to Marriage. I think that Marriage is much more than a loving-committed relationship between two adults. There are many good and loving relationships – they are free, they are faithful, many even fruitful. Are they bad? No. Are they evil? No. But are they marriage? I don’t think so… But what makes a marriage a Marriage… And here is where I don’t know if I can continue with merely a short answer. This is getting too “theology-of-the-body”. And how can we explain all that in two paragraphs? So we are stuck trying to define marriage to those who don’t see it as more than a loving, committed relationship between to consenting adults. Here’s my attempt:

A Marriage is a relationship within which sex is guaranteed not to cause any problems, heartaches, disease, issues or any pain.

I’m curious to know what you think. Then I’ll post my explanation to the above. Pedro