What do Pope Francis, WYD, Aparecida, and the New Evangelization have in common? 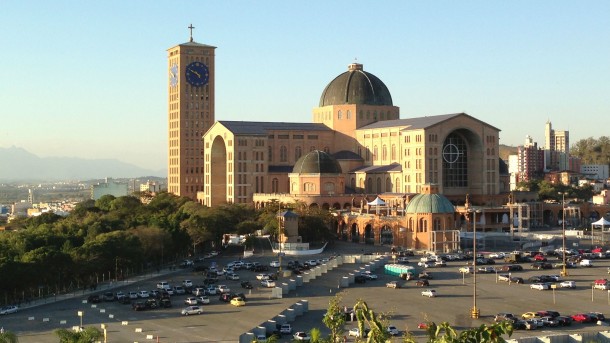 Salt and Light Photo: The National Shrine of Our Lady of Aparecida, Brazil By Sebastian Gomes World Youth Day Rio is about to begin and everyone is wondering what Pope Francis is going to say and do on his first trip back to South America.  Well, last week I may have uncovered a major clue. A day after our Salt and Light team landed in Rio, I hit the road again with Fr. Tom, Charles Le Bourgeois and our cameraman Dave LeRoss to the famous town of Aparecida.  After driving for four hours through the rolling hillside of eastern Brazil, we emerged onto a great plain and all of a sudden saw a magnificent red stone Basilica reaching toward the sky: the National Shrine of Our Lady of Aparecida. Housed inside the basilica – the second largest basilica in the world behind St. Peter’s – is a two and a half foot clay statue of the Blessed Virgin Mary, known since the 18th century as Our Lady of Aparecida.  The shrine attracts up to ten million pilgrims every year, and that’s even more impressive considering its remote location! But there’s another story at Aparecida that needs to be told alongside this one.  In 2007 the Bishops of Latin America and the Caribbean held their Fifth General Conference at this Marian shrine.  The meeting created a lot of buzz because of the religious and cultural backdrop: the Bishops knew that popular Evangelism and growing secularism posed serious challenges to the Latin American Church.  But what really caught people’s attention was the presence of Pope Benedict XVI.  He had come to participate in the inauguration ceremony, where he shared his thoughts on the current state of the Church and the path going forward. 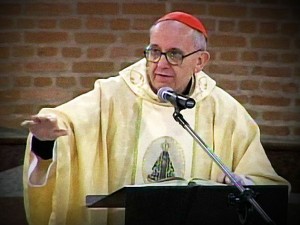 The final document that came out of the conference is known as the Aparecida Document, and Benedict’s influence is apparent throughout.  But what is also apparent is the influence of another man who participated in the conference, then Cardinal Jorge Mario Bergoglio.  In fact, Cardinal Bergoglio was one of the chief architects of the document. If we continue to connect the dots we see that the pastoral strategy charted in the Aparecida document is being implemented by Bergoglio on the universal level in his ministry as Pope Francis: the importance of a renewed encounter with Jesus for every Christian; the need for Gospel simplicity and humility; a preferential option for the poor; a serious concern for the environment; the necessity of prayer and cultural devotions.  All of these elements are, according to the Bishops of Latin America in 2007 and now Pope Francis, essential for evangelization in our world today.  And if we want to understand what Francis will say and do in Brazil over the next week, perhaps we should consult the Aparecida Document. Two final points are worth considering.  First, the document stresses the importance of widespread Marian devotion on the continent, which most of us would expect, but should not be underestimated.  In paragraph 43, the Bishops state that globalization has created a diversity of individual and individualized cultures in Central and South America.  This diversity, the Bishops say, is not a bad thing.  But as this phenomenon progresses, what is lacking is, “the possibility of this diversity converging into a synthesis, which, encompassing a variety of meanings, can project it toward a common historic destiny.”  Herein lies the great gift of continental devotion to Mary, “which under different names, has been able to merge different Latin American histories into a shared history: one that leads to Christ.”  There was good reason why the Bishops met at the National Shrine of Our Lady of Aparecida and not a conference center or hotel. Second, the document in many ways foreshadowed the 2012 Synod on the New Evangelization.  One of the major discoveries at that meeting was the need for self-reflection in a spirit of humility, of looking inward to see how our words and actions affect the credibility of the message in our world today.  This kind of open and honest critique was at the heart of Aparecida as well. The other major theme that connects these two meetings is the encouragement that comes from a renewed encounter with Jesus.  There really is no sustainable program or missionary zeal unless each and every Catholic renews his or her faith in Jesus Christ.  The Synod said that, Aparecida said that, and that may be why Pope Francis has decided not to publish a post-synodal Apostolic Exhortation on the New Evangelization.  In any case, the Aparecida document should not be read and studied exclusively in the context of Latin American Catholicism, but in the context of the New Evangelization in the universal Church as well.