Pope Francis personally doubts Medjugorje apparitions, but will this affect the official decision? 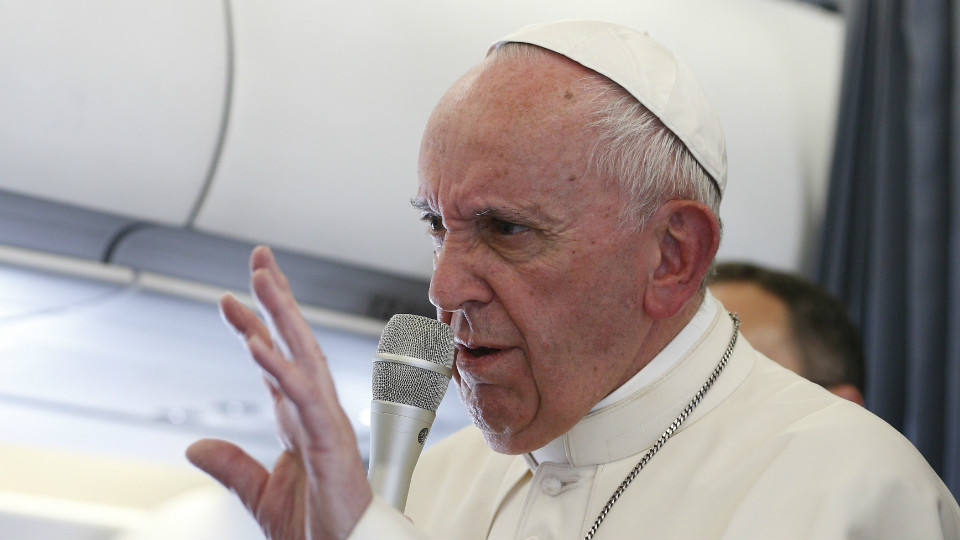 (May 13, 2017: Pope Francis speaks with journalists aboard his flight from Portugal to Rome following a visit to Fatima to commemorate the 100th anniversary of the Marian apparitions and to canonize Sts. Francisco and Jacinta Marto, two of the young seers. Photo: CNS/Paul Haring)
The Pope "doubts" Medjugorje apparitions As often happens following an international trip of Pope Francis, the headlines focused on his in-flight press conference en route to Rome. The Pope had just completed a prayerful visit to Fatima to mark the 100th anniversary of the 1917 Marian apparitions. The apparitions at Fatima, which though officially recognized, haven't been immune from speculation and controversy, prompted an Italian journalist to ask the Pope about the alleged apparitions in Medjugorje, which started in 1981 and have continued to the present day. What the Pope said was both relevant and constructive. After briefly summarizing the process of the Vatican's investigation into the apparitions, which started under Benedict XVI in 2010, Francis revealed a few nuggets from the concluding report of Cardinal Ruini, submitted to him in late 2013. That report has not been made public. "About the first apparitions, when the “seers” were young, the report more or less says that the investigation needs to continue," he said. "Concerning the alleged current apparitions, the report expresses doubts." Then the Pope candidly expressed his own personal opinion on the matter: "Personally, I am more mischievous: I prefer Our Lady to be a Mother, our Mother, and not a telegraph operator who sends out a message every day at a certain time… this is not the mother of Jesus. And these alleged apparitions have no great value. I say this as my personal opinion." Click here to watch Pope Francis speaking about Medjugorje. This was interpreted by some Catholics as Francis essentially quashing the Medjugorje apparitions, and that the Vatican's official findings will merely reflect the Pope's personal opinion on the matter. But this is an oversimplified conclusion. The Pope's comments can be read in full continuity with the Vatican's long-standing position on these alleged apparitions, and with the Catholic Church's long-standing position on Marian apparitions and devotions in general. "Go slow, let things mature, don't rush into judgement" Last year I hosted renowned Vatican journalist John Thavis on our book show to discuss his latest book, "The Vatican Prophecies: Investigating Supernatural Signs, Apparitions, and Miracles in the Modern Age". John and I agreed beforehand that we would spend a good portion of the show discussing the Medjugorje apparitions, to which he devoted an entire chapter of the book. John pointed out that very early on Medjugorje was steeped in conflict between the local bishop and the Franciscan Friars who run the parish; such conflict is always a red flag for the Vatican. John also noted that the Vatican fell behind as the apparitions quickly gained a following in the internet and social media age. To date approximately 35 million pilgrims have visited Medjugorje, some claiming extraordinary spiritual experiences. Such piety and devotion is not so easily dismissed. The complexity of Medjugorje has in a sense immobilized the Vatican. Their official position has been consistent: "Go slow, let things mature, don't rush into judgement," says John. But when alleged apparitions take off among the faithful, playing the waiting game could backfire. And there's another reason why Pope Francis has not yet published the report: "It's very difficult for the Catholic Church to say "Yes, here's the verdict" on something that is still going on! What if the Vatican says, "This is worthy of belief," and tomorrow—as one cardinal put it to me—"Mary spouts some heresy!" The Vatican simply cannot take that risk, according to John. Ironically, the complexity of the Medjugorje question actually clarifies the Pope's comments during the in-flight press conference. He simply shared facts of Ruini's report which state that the first apparitions require further investigation. Watch my conversation on Medjugorje with John Thavis by clicking on the video below. Will the Vatican's decision merely reflect the Pope's personal opinion? Unlikely. The investigation has been going on for a long time; long before it landed on Francis' desk. It's far more likely that Francis' personal doubts were shaped by the observations in the official report handed to him in 2013. Still, it was surprising to hear Francis readily offer his personal opinion on such a highly debated matter. Think, for example, of his calculated silence on questions raised by a few of his cardinals concerning Amoris Laetitia. For all his endearing spontaneity, Francis is a discerning, calculated man. That suggests his willingness to express his own opinion on Medjugorje was probably not accidental. So what's the point he's making? Francis began his response to the Medjugorje question by emphasizing an important and long-standing Catholic teaching: "All apparitions or presumed apparitions belong to the private sphere; they do not form part of the public ordinary magisterium of the Church." In other words, apparitions are not essential for faith. This is a key contextual statement. And it's a complementary statement to his own personal opinion; the Pope shared his own opinion because he knows what the church teaches is true: the Medjugorje apparitions are not essential to the Catholic faith. Amid the complex questions surrounding Medjugorje, it's important for Catholics to remember the 'hierarchy of truths', and what is and isn't "from the heart of the Gospel." (Evangelii Gaudium #34-39) This press conference was a teaching moment for Pope Francis as pastor of the universal church. That is how his comments can be read in full continuity with the Vatican's long-standing position on these alleged apparitions, and with the Catholic Church's long-standing position on Marian apparitions and devotions in general.