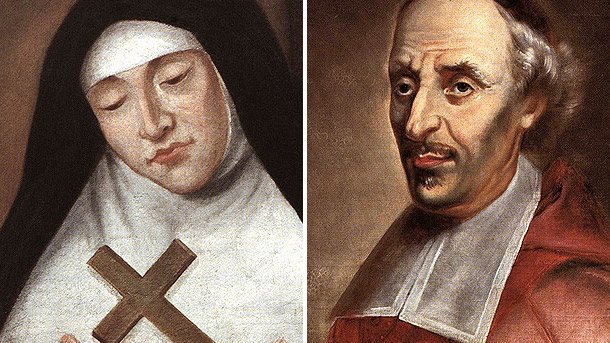 It is with great joy and thanksgiving that the Bishops of Canada welcome today’s proclamation by Pope Francis that the Universal Church recognizes Bishop François de Laval and Mother Marie of the Incarnation as Saints. Late last year, the Holy Father had consulted the Canadian Conference of Catholic Bishops about his proposal to proceed with their canonization. We responded then, and we do again today, with a resounding Amen! We are grateful to God for raising up in our midst these two wonderful examples of holiness and service. We thank Pope Francis for this great gift to the Church in Canada, and to all the people of our nation.
Saint François de Laval (1623-1708) was the first Bishop of New France. His diocesan territory originally included most of what is now Canada, much of upper New England and all the Mississippi Valley, extending even to the Rocky Mountains. He is admired for his pastoral work among the Aboriginal Peoples and the settlers of New France, and for trying to defend Native People from being exploited by merchants and governors through the sale of alcohol. He was especially committed to education, founding both a major and a minor seminary. The Séminaire de Québec, which later established Laval University, has made major contributions in the intervening centuries to higher academic education not only in Quebec and the rest of Canada, but throughout North America. Saint François de Laval was known for his commitment to evangelization and his generosity to the poor. After his resignation as Bishop of Québec, he devoted his final years to prayer, penance and the care of the poor.
Saint Marie of the Incarnation (1599-1672) was an Ursuline nun who founded a convent and school to educate girls in New France. Daughters of the French settlers and of the Aboriginal Peoples were educated together, sharing the same table and the same dwelling. After learning several Aboriginal languages, she compiled catechisms and prayers in Huron and Algonquin, as well as an Algonquin dictionary. She also maintained a voluminous correspondence. Her letters remain today an important witness to her deep and generous mystical spirituality, as well as to the day-to-day history of New France. Saint Marie of the Incarnation began a long tradition throughout our continent of Ursuline elementary and secondary schools, dedicated to the education of girls and young women of all faiths and languages. Her canonization happily coincides with the 375th anniversary of her arrival in what is today Quebec City. Their proclamation as Saints arrives at two important junctures this year in Canadian history. The 350th anniversary of the canonical establishment of Notre-Dame-de-Québec, the first parish in North America outside Spanish-speaking territories, reminds us of the missionary nature of the Church as it was planted in Canadian soil. May Saint François de Laval and Saint Marie of the Incarnation renew in us a sense of mission and our commitment to evangelizing in the joy of the Gospel. This year also has witnessed what the Truth and Reconciliation Commission announced would be its final National Event. May our two new Saints assist all of us, Indigenous and non-Indigenous, to build a better future that respects and reverences the contributions that each race and people brings to our country and to our world. Inspired by the examples of these two Saints, and strengthened in the Holy Spirit, let us all collaborate in renewing the face of the earth and founding a civilization of love and service.

+Paul-André Durocher Archbishop of Gatineau and President of the Canadian Conference of Catholic Bishops April 3, 2014