Welcoming 2017: looking back to move forward 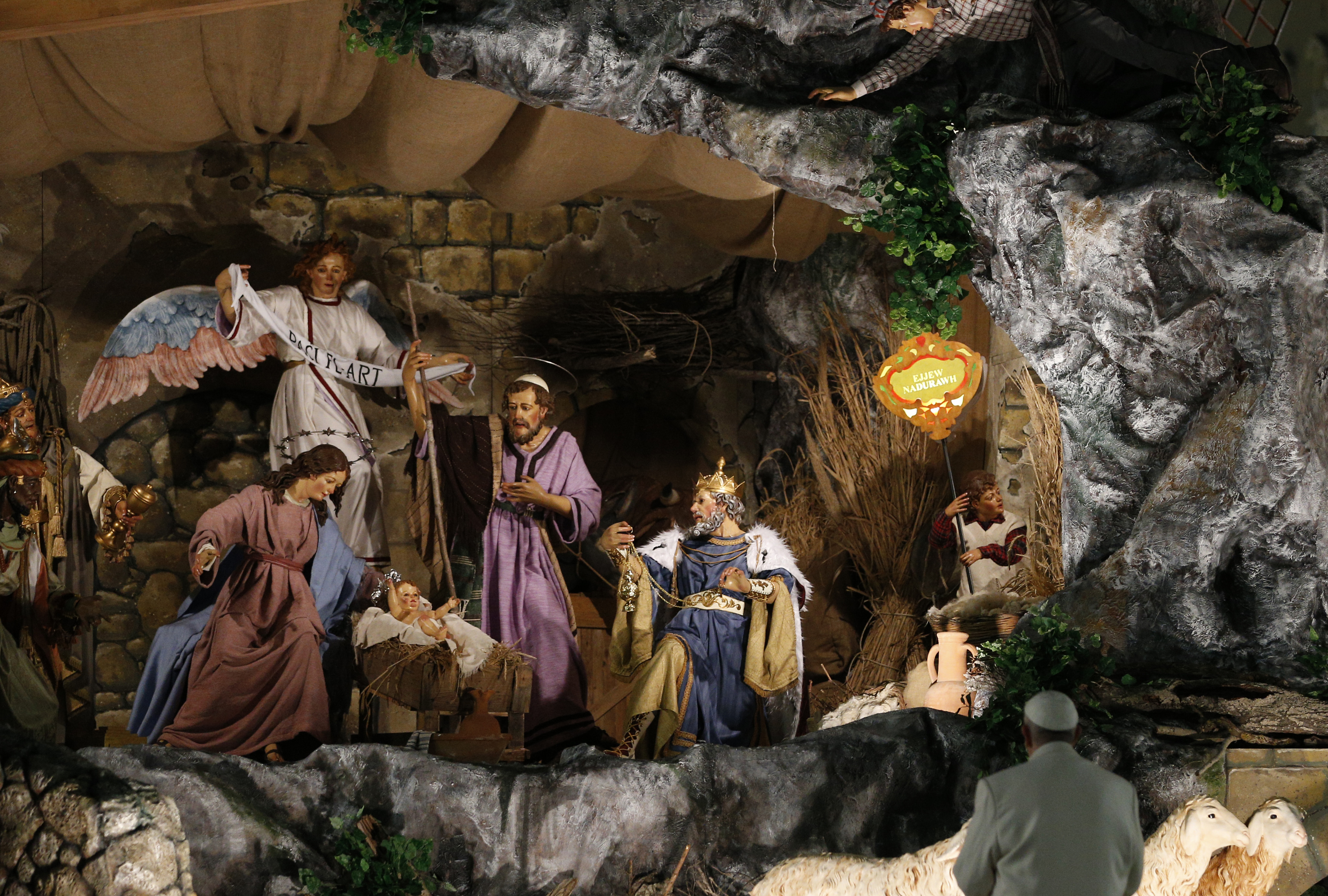 (CNS Photo: Pope Francis visits the Nativity scene in St. Peter's Square after leading vespers on New Year's Eve at the Vatican Dec. 31.)
At Salt + Light we spend a lot of time reading, analyzing and sharing the words of Pope Francis. And over the past four years, the Pope has given us a lot to think about and act upon. Of the many recurring themes that emerge in his speeches and official documents, one that has not received enough attention is his emphasis on moving forward, in the Christian life and as a church, always forward. The complexities and challenges in our world lead some, on the other hand, to look back to "the good ol' days" when life was apparently simpler and more orderly. This attitude finds stability and comfort in a past era, and resists the inevitable changes that occur through history. When our journey appears to be stuck in the mud of messy situations and unthinkable violence, it seems easier and safer to turn back instead of trudging forward. A recent example of this is Donald Trump's tagline during the 2016 presidential campaign: "make America great again." His rise to power fed off this widespread sentiment among the American people. But this was by no means an isolated example (think of the Brexit vote in England). Pope Francis has continually sung a different tune since his election in 2013, and it is worth contemplating at the beginning of a new year. In his recent Christmas address to the Roman Curia (the government of the Vatican), the Pope reviewed his plan for reform saying, "Since the Curia is not an immobile bureaucratic apparatus, reform is first and foremost a sign of life, of a Church that advances on her pilgrim way, of a Church that is living and for this reason semper reformanda, in need of reform because she is alive." In the context of the current systematic reform of the Curia, the Pope emphasized the fifty year old concept of the Catholic Church as a "pilgrim" community, progressing through history towards God, that was officially articulated at Vatican II. But the important point here is the notion that the church must live in a permanent state of conversion, precisely because it is a living thing. G.K. Chesterton once wrote that "A dead thing can go with the stream, but only a living thing can go against it." (The Everlasting Man) To move forward through history, to make any kind of real progress--whether in our own lives, in the church, or in the world--a clear direction has to be charted, and we can be grateful to Pope Francis for charting it so clearly in our time. What propels us forward? Interestingly and paradoxically, it is our tradition. The church, by the grace of God alone, has managed to safeguard the impulse of eternal revolution in her patrimony, and that impulse is the good news of Jesus, who is today present in the Holy Spirit. The only truly Christian reason for "going back" is to reacquaint ourselves with this impulse to move forward. That is why the nostalgic longing for "the good 'ol days" is a misguided one. The tradition is not something to go back to, but is a well from which to draw water for the journey ahead. What is required of us at the beginning of a new year is a renewed faith in the Holy Spirit to move forward as individuals, as a church, and as a human family. The close of 2016 is simultaneously the opening of 2017. Let's not forget the words of Pope Francis when he closed the Holy Door at the end of the Year of Mercy on November 20, 2016: "God has no memory of sin, but only of us, of each of us, we who are his beloved children. And he believes that it is always possible to start anew, to raise ourselves up. Let us also ask for the gift of this open and living memory." Happy New Year from all of us at Salt and Light!