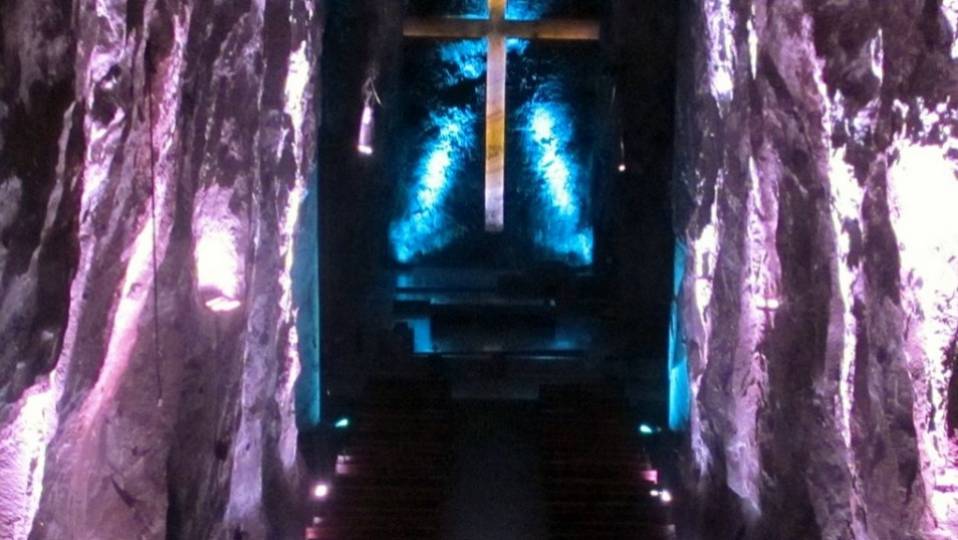 Back in June, I shared a story on the Weekly News Round-Up about a weeping statue of Our Lady in New Mexico that went viral on social media. At the time, I was wondering if it's a miraculous event or just another hoax. Here's the original news cast from the local news channel with the entire story. Interestingly, the Bishop of  the Diocese of Las Cruces, Bishop Oscar Cantú, recently released their preliminary results on that event and concluded that,  “So far we have not discerned natural causes for the statue’s emitting of liquid.” Basically, they haven't been able to find any natural causes and are now investigating the possible spiritual origins of the miracle. "We must," the Bishop wrote in his statement, "discern if it is from God or from the devil." ChurchPop posted the latest details about the weeping statute here but you can read the entire statement from the Bishop here.

And speaking of Our Lady, is it possible that she left us another image of herself, besides the famous image that she left on Juan Diego's tilma in Guadalupe? Aleteia published yesterday, a modern-day "Jonah story" about a 17th-century Venezuelan tribal chief, who, like Jonah, refused an evangelization mission. According to the story, Our Lady appeared to him twice, first in 1651, then again in 1652, asking him to be baptised and spread the faith to his tribe.  He refused her twice. Legend has it that when she took leave of him the second time, she left in his hand a tiny image of herself holding the Child Jesus in her lap. Ateleia has the entire story here. 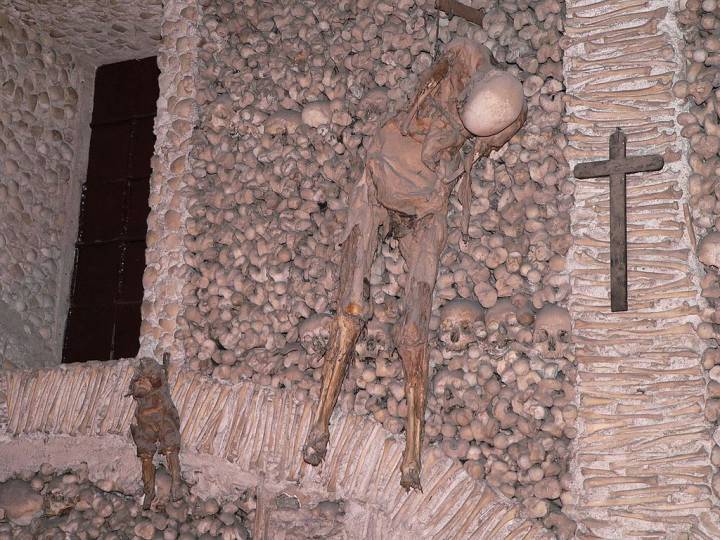 Photo credit: Nuno Sequeira André
Now, I'm sure you've heard of the Bone Chapels in Rome, Portugal, Poland, and Austria. But have you heard of the cathedral in Colombia that's 590 feet underground and completely carved out of salt? Neither had I until this week and thanks to The Daily Mail. According to Wikipedia:  before the underground church was built (around 1932), salt miners had carved a sanctuary, as a place for their daily prayers asking for protection to the saints before starting to work. In 1950, the construction of a bigger project had begun: the Salt Cathedral which was inaugurated on August 15, 1954, and dedicated to Our Lady of Rosary, patron saint of miners.

Photo Credit: Ben Bowes
Apparently, salt mine workers removed 250,000 tons of salt to create the Cathedral of Zipaquirá, which can hold 10,000 people. I suppose one can say, (literally) that this cathedral takes church architecture to a whole new low. You can read all about this unique pilgrimage destination here along with some cool facts and pictures here. Since we are on the topic of unique places of worship, Aleteia published a story about a secret Catholic chapel in an attic created in Reformation-era Amsterdam used to serve persecuted Catholics in the 17th century! It resides in an attic of a building close to Amsterdam’s infamous red-light district. 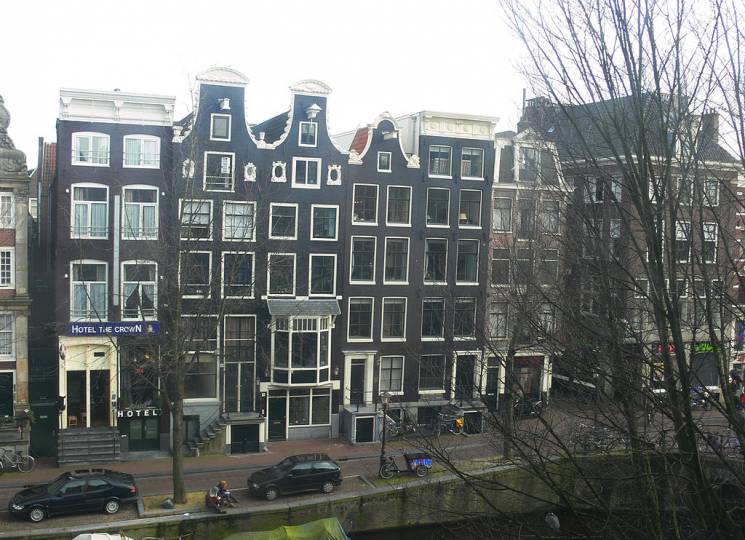 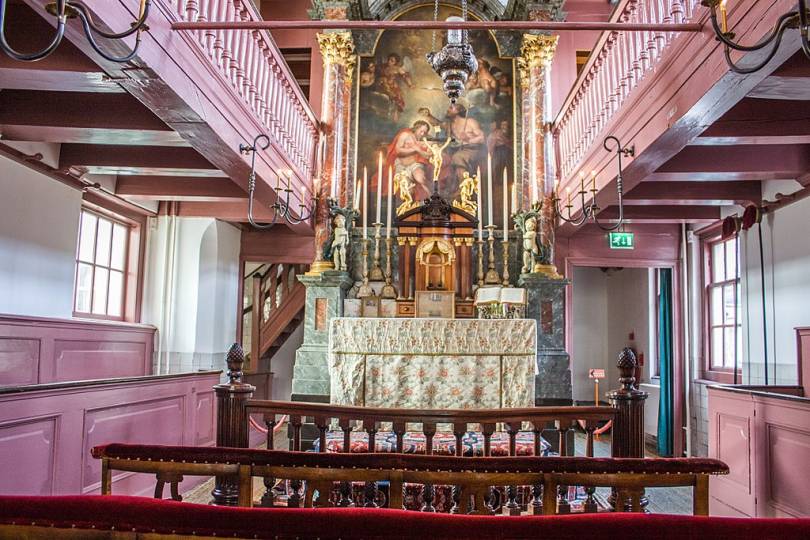 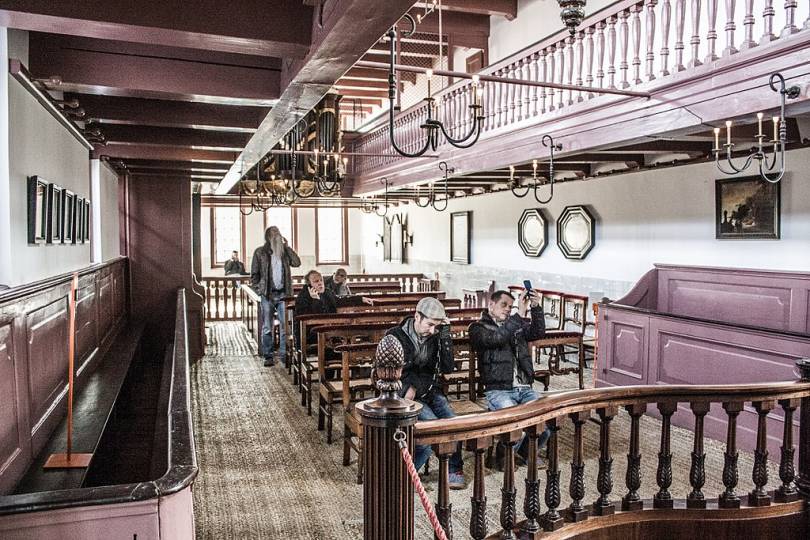 Photo Credit: Shadowgate
Imagine that! This magnificent 17th-century chapel is called Ons’ Lieve Heer op Solder. Mass is still celebrated here regularly, making it one of the oldest operating churches in Amsterdam. You can read all about it here. Finally, here's an interesting story, posted by our friends at The Grotto Network about people in Davenport, Iowa, who are on a mission to provide free healthy food to this lower income community through a community garden. Well, that's all that I have for you this Friday. I hope you enjoyed this post as much as I enjoyed putting it together for you. Be sure to check back with us next Friday for more. Also, be sure to catch all the latest Catholic news and stories from around the world on Perspectives Daily. The show airs on the network Monday to Friday at 7pm ET or you can catch the latest episodes online here.