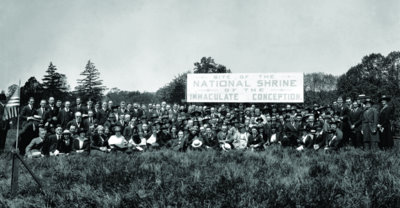 Every year, over one million people visit the Basilica of the National Shrine of the Immaculate Conception in Washington, D.C. And now, this Thursday, the largest Catholic Church in North America celebrates its 50th anniversary. To commemorate the occasion, Salt + Light Television will be broadcasting a special Mass from the Basilica. Join us Thursday November 19th @ 5pm ET (or 9:30pm PT) or Friday, November 20th @ 12:30pm ET (or 9:00pm PT) for the Jubilee Mass celebrated by the Most Reverend Donald W. Wuerl, the Archbishop of Washington, with Most Reverend Michael J. Bransfield, the Bishop of Wheeling-Charleston, providing the homily. The Basilica is impressive in size and in beauty. Catholic News Service offers this background information on the this glorious Church: 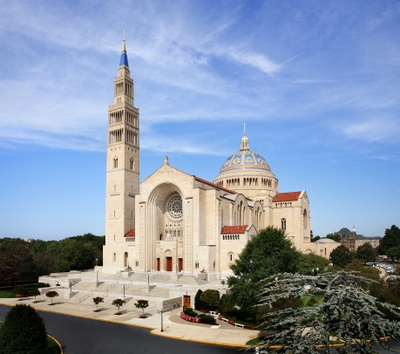 'Nation's parish' celebrates 50 years as place of prayer, pilgrimage By Carol Zimmermann Catholic News Service WASHINGTON (CNS) -- The Basilica of the National Shrine of the Immaculate Conception in Washington -- the largest Catholic church in North America and one of the 10 largest churches in the world -- is a familiar place to U.S. Catholics who regard the immense structure as their own. The basilica, which marks the 50th anniversary of its dedication Nov. 20, is not a parish or a cathedral. Instead, it was designated by the U.S. bishops as a national place of prayer and pilgrimage, something the basilica's 1 million annual visitors know well. The book "America's Church," published by Our Sunday Visitor in 2000, describes the basilica as having "no parish community as its own; but rather counts every American Catholic among its members. No single bishop claims it as his cathedral; rather it is the church of all the nation's bishops. ... In every way, the national shrine is America's Catholic church." Read the rest of the article