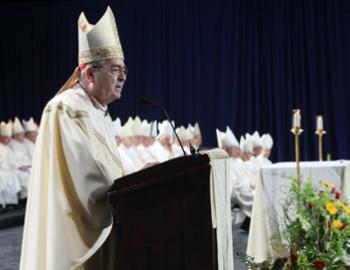 It is fitting then, that the theme of the Knight of Columbus' convention this year is "I am my brother's keeper" Cardinal Rigali said, adding that the theme is merely a reflection of the Knight's core ideals and a challenge to all Knights to show solidarity with "all brothers and sisters." This challenge to be in solidarity with all brothers and sisters has taken the Knights far and wide.  Here in D.C. , I met a couple from Manitoba. Larry and Margaret Kustra made a trip to Cuba this past year to deliver wheelchairs to those in need. Larry is the immediate past State Deputy to Manitoba. Knights from Saskatchewan also went on a special trip to Haiti and the Dominican Republic to deliver wheelchairs this past year. Haiti is the major focus for the Knights this year. Today, along with Project Medishare, the Knights announced a new initiative called Hope for Haiti's Children. Approximately 800 children lost limbs as a result of the earthquake and the Knights will provide prostetic limbs for all of those children.  Receiving a prosthetic limb requires physiotherapy, so the Knights will also provide each child with a two-year program of physiotherapy administered by the University of Miami's Medishare Hospital in Port-au-Prince.  The estimated cost of the initiative will be one million U.S. dollars. 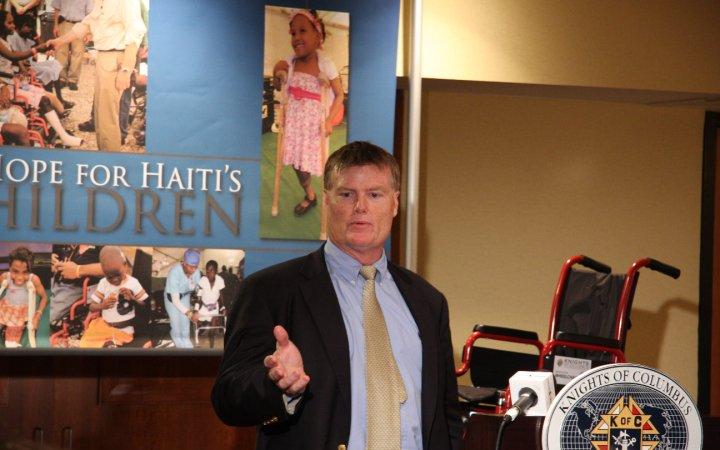 The director of rehabilitation services for Medishare, Professor Robert Gailey, explained in Haiti, children are very low priority for prosthetic limbs.  Men are the highest priority because they are the "workers" and are generally supporting the family.  It is unheard of for a child to receive a prosthetic limb.  This initiative will ensure that kids are no longer overlooked; that if a child is missing a limb, that he or she can still live a full life and that hope is not lost.  Gailey shared that in Haiti if a child is missing a limb, then the child is often shunned or ostracized -- he may be seen as bad luck, or he did something wrong.    Gailey was hopeful that in the future, an educational component would develop to counter the stigma associated with prosthetics.  Medishare was very excited to be working with the Knights.  The group has already been able to provide medical care to Haitians; unlike a lot of recent aid, money and containers of aid have been moving freely between Medishare and the people on the ground.  The Knights also announced today that, in conjunction with Global Wheelchair Mission, they will be distributing another one thousand wheelchairs in Haiti over the next four to six months.  That brings the number to 22-hundred wheelchairs distributed in the earthquake devastated country. The message was clear: the Knights are commited to bringing a new hope to Haiti. - Photos: top, kofc.org; bottom: saltandlighttv.org, visit our facebook page for more photos.