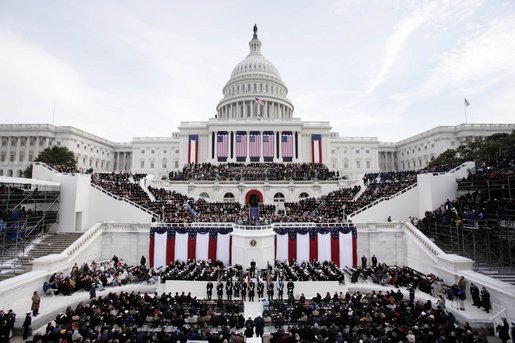 Boisterous spectators press upon security fences, necks craning for a mere glimpse of the motorcade. Even the most antagonistic press outlets momentarily withhold their cynicism. Belief in this institution having been tested by so many disappointments and scandals, the leader's faithful now pause, smile and exhale. He's here. This is what we all saw on CNN during Barack Obama's inauguration. But the scene played out much the same way less than one year ago, when it was Pope Benedict XVI arriving at the White House. Critics of either man will bristle at the comparison, so allow me to explain. I'll never forget one beleaguered deacon I met during the U.S. papal visit. With tears in his eyes, he revealed, “We are wounded. We needed this.” Clerical morale had hit a terrible new low after the sexual abuse cases. But even more than his words or actions, the Pope's presence reassured American Catholics that the Church (and thus God) understood their grief and would accompany them through it. Together with their pastor, they glimpsed a new dawn. As a fellow Catholic, it was easy to relate to this community and share their collective sense of relief. I confess, though, that it's harder for me to grasp the healing significance of America's first black President. Yes, Canada is haunted by it's own racist past, but slavery and segregation do not play so prominently in my nation's--let alone my family's--history. I cannot imagine how deeply this legacy could wound a man's soul, so neither can I comprehend the restoration effected by Obama's rise to power. Admittedly emotionless, I listened on as the new President addressed his country. While I acknowledge his many strengths, I cannot disregard certain policy positions that threaten human life and, as such, I remain immune to Obamamania. Yet after witnessing yesterday's event, I better understand that, to many, Obama represents much more than his views or abilities. I get the many Americans who felt that they really, really needed this.