Pope Benedict XVI’s Apostolic Exhortation Verbum Domini has been called the most important document on the Bible in 45 years. 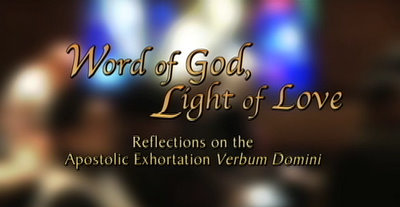 The Exhortation is the result of the October 2008 General Assembly of the Synod of Bishops in Rome, which was dedicated to “The Word of God in the Life and the Mission of the Church.” At a spring symposium sponsored by Salt + Light and Regis College in Toronto, leading Church figures and theologians addressed Verbum Domini as both a scholarly work and a popular teaching instrument. Salt + Light Television presents the major addresses from the conference in the four part series Word of God, Light of Love: Reflections on the Apostolic Exhortation Verbum Domini. The addresses will be broadcast on Salt + Light TV and streamed online June 7-10 at 8pm & 12am ET / 5pm & 9pm PT. Tonight's premiere episode features Cardinal Donald Wuerl, the Archbishop of Washington, speaking on The Word of God and the New Evangelization. Visit the Word of God, Light of Love program page for a list of speakers and broadcast details.