Venerable Father Michael J. McGivney was born to Irish immigrants on Aug. 12 1852 in Waterbury, Conn. As the eldest of 13 children, six of whom died early in childhood, McGivney began working at the age of 13 in Connecticut’s metal industry. But, with the priesthood resonating in his mind, at the age of 16, McGivney left work and went to Canada for preparation to enter the seminary. On Dec. 22, 1877, McGivney was ordained a priest at St. Mary’s Seminary in Baltimore, Md.
Five years later, in 1881, while McGivney served as assistant pastor at St. Mary’s Church in New Haven, McGivney formed the Knights of Columbus. Due to dangerous working conditions that left many families without a father and an increase in popularity of fraternities, McGivney saw a need to establish a lay organization, whose mission would be to “prevent Catholic men from entering secret societies whose membership was antithetical to Church teaching, to unite men of Catholic faith and to provide for the families of deceased members.” 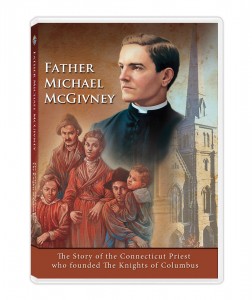 “Father Michael McGivney,” produced by the Knights, chronicles the life of the founder of an organization that has become the world’s largest Catholic family fraternal service organization, with 1.8 million members in 15,000 councils world-wide. They strive to perform all good works as led by their four core principles- charity, unity, fraternity and patriotism. “Father Michael McGivney” will be available on the Salt and Light Store for $19.95 for a limited time only, while supplies last. Don’t miss out on the story that celebrates the triumphs and tribulations of a man who may one day be America’s first canonized parish priest.