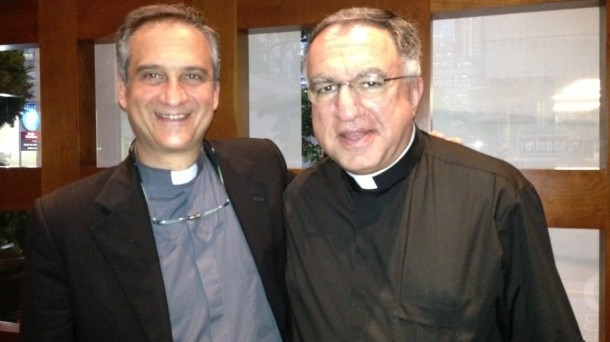 During his time in the Vatican assisting the Holy See Press Office, Fr. Thomas Rosica got a chance to meet the new director of the Vatican Television Centre, Msgr. Dario Viganò. This past week Msgr. Viganò was in Toronto and came to spend a day at Salt and Light's studio. We took full advantage and interviewed him for Perspectives, and Witness. If you watched the spectacular images of Pope Benedict XVI's departure from Vatican City on February 28, it was thanks to the Msgr. Viganò who planned and directed that coverage. He told us the idea of having 19 cameras following the helicopter's flight was inspired by the opening scenes of the iconic Italian film, La Dolce Vita. In the opening scenes of that movie a helicopter carrying a statue of Christ flies over the newly developed Roman suburbs towards the Vatican, seemingly blessing the people below (especially the young girls sunbathing on their rooftop, as the pilot - a young Marcelo Mastroianni - hovers above their terrace to say hello).  "This time the helicopter would carry the vicar of Christ from the Vatican, to the suburbs, caressing the people of Rome one last time," Msgr. Viganò said. 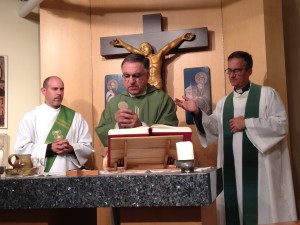 Msgr. Viganò also offered some inspiring words for our staff, reflecting on the idea of being "salt" and "light" for the world. He said both items are things that don't exist as part of a spectrum, they exist or are noticed only by being placed in contrast with something else. "Light becomes apparent when placed in contrast against darkness, and the presence of salt is evident only when placed in contrast against something that has no taste...what you are doing is being salt, and light, against the backdrop of a culture where darkness and tastelessness seems to prevails at times." Our thanks to Msgr. Viganò  for taking time to visit our studio and spend the day with us.