Vatican reaches out to First Nations 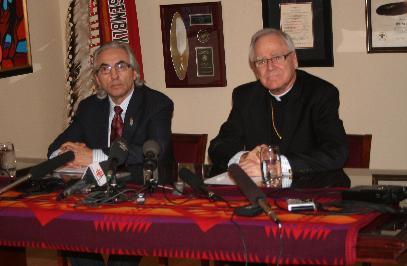 This afternoon history was made as Pope Benedict XVI expressed regret to Canada’s First Nations community over past abuses involving the infamous residential schools system. At the conclusion of today’s General Audience His Holiness met privately with Phil Fontaine, Grand Chief of the Assembly of First Nations, the Most Reverend James Weisgerber, president of the Canadian Conference of Catholic Bishops, and several B.C. aboriginal leaders. The purpose of the meeting was to foster reconciliation between aboriginals and the Catholic Church in light of the dark legacy of residential schools. For over one century, dating from the 19th century until the 1970s, more than 150,000 aboriginal children in Canada were forced to attend state-funded Christian schools with the hopes of assimilating them into Canadian society. The Catholic Church was in charge of three quarters of the schools. What resulted was what many have called “cultural genocide.” Young students were unable to visit and see their parents and they were prevented from speaking their native tongue. Like all efforts of cultural destruction the schools failed. One of my favorite poets is Louis MacNiece, an Irishman who left his home country even though he remained attached to his roots. He penned these memorable lines, “I cannot deny my past to which my self is wed, The woven figure cannot undo its thread.” Those words eloquently summarize the plight of Canadian aboriginals who despite indoctrination in the residential schools found themselves unable to deny their heritage, culture and history. The Canadian government has admitted that physical and sexual abuse in the schools was rampant. Last year Prime Minister Stephen Harper issued a historic and moving apology as have many of the other Christian denominations involved in the government program. Today, Pope Benedict XVI added his voice to those who have asked for forgiveness. A statement released by the Vatican detailed the emotional meeting saying: “Given the sufferings that some indigenous children experienced in the Canadian residential school system, the Holy Father expressed his sorrow at the anguish caused by the deplorable conduct of some members of the Church and he offered his sympathy and prayerful solidarity. “His Holiness emphasized that acts of abuse cannot be tolerated in society. He prayed that all those affected would experience healing, and he encouraged First Nations Peoples to continue to move forward with renewed hope.” This was a momentous step forward in relations between the Catholic Church in Canada and the First Nations. Interestingly, in his General Audience address prior to the meeting with Chief Fontaine, the Pope explored the role of the Christian’s duty to show others the beauty of God. The Pope said, "There is a certain visibility of God in the church and in the world, and we must learn how to see it. God created humankind in his image, but this image is covered with so much dirt from sin that it is almost impossible to see." I couldn’t help but think of the young aboriginal children who suffered from physical, emotional and sexual abuse, cut away from their parents, stripped of their cultural heritage and banned from speaking the language that meant “home” for them. How could these innocent children possibly see the reality of Christ’s love in the lives of those professing devotion to him? Hopefully, for all those tarnished by the gross errors and abuses of the Residential School System, they will find in Pope Benedict’s heartfelt expression of regret a small sign of Christ’s consolation and the Canadian Church’s real hope to begin again. (Photo courtesy Canadian Catholic News / Deborah Gyapong)