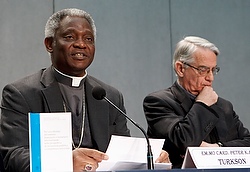 In these past few months, not only has our Canadian economy cooled, but the European debt crisis continues to spiral out of control. Many economists throughout the world still remain skeptical as to whether any long-term, effective changes will be brought forward.
Officials at the Vatican, however, are more optimistic. The Pontifical Council for Justice and Peace released a 41-page letter on Monday entitled, "Toward Reforming the International Financial and Monetary Systems in the Context of Global Public Authority." Quoting "Gaudium et Spes," Cardinal Peter Turkson writes in the opening preface that, "The Church, which has long experience in human affairs and has no desire to be involved in the political activities of any nation, ‘seeks but one goal: to carry forward the work of Christ under the lead of the befriending Spirit. Christ entered this world to give witness to the truth; to save, not to judge; to serve, not to be served.'" Below is an excerpt from the English translation of the letter.