“A zealous pastor, a humble religious, a faithful churchman, and an admirable human person” are just some of the words by which my fellow Basilian and biographer of our order, Fr. P. Wallace Platt, has described George Bernard Cardinal Flahiff. George Flahiff, born on 26 October 1905 in Paris, Ontario, was Superior General of the Basilian Fathers from 1954 to 1961, Archbishop of Winnipeg from 1961 until his retirement to St. Michael’s College, Toronto, in 1982, and a Cardinal of the Catholic Church from 1969 until his death on 22 August 1989. However, most importantly in the context of this Year of Faith and fiftieth anniversary of Vatican II, then-Archbishop Flahiff was a father of the Second Vatican Council (1962-1965). Archbishop Flahiff attended every session of Vatican II but, as Fr. Platt relates, he only spoke once to the assembly of bishops. This was on 2 October 1964, in a speech on a draft document, or schema, which led to Unitatis Redintegratio, Vatican II’s Decree on Ecumenism. Unitatis Redintegratio was promulgated by Pope Paul VI on behalf of the Council on 21 November 1964, about two months after Flahiff’s speech. Two points of this speech stand out in particular, since they came to be included, sometimes almost verbatim from Flahiff, in the final draft of Unitatis Redintegratio. First, Flahiff lamented the many divisions between Christian ecclesial communities and polarization within the Catholic Church itself. Flahiff recognized these realities as a counter-sign to God’s kingdom. He told the assembled bishops at Vatican II that “schisms can remind the Church that ‘she is not yet as holy as she should be and not yet perfectly obedient to her vocation to be catholic.’” Second, on a more positive note, Flahiff highlighted the vital role of the Holy Spirit in ecumenical activities: “The Spirit of God himself brings forth the varied fruit he wishes and leads all Christians to greater fidelity to the will of God.” One senses the spirit of George Flahiff especially in Unitatis Redintegratio, paragraph 4. On inter-Christian and intra-Catholic divisions, the document says:

For although the Catholic Church has been endowed with all divinely revealed truth and with all means of grace, yet its members fail to live by them with all the fervor that they should, so that the radiance of the Church's image is less clear in the eyes of our separated brethren and of the world at large, and the growth of God's kingdom is delayed... The divisions among Christians prevent the Church from attaining the fullness of catholicity proper to her, in those of her sons and daughters who, though attached to her by Baptism, are yet separated from full communion with her.

The same paragraph of Unitatis Redintegratio speaks in this way of the work of the Holy Spirit in fostering Christian unity:

Nor should we forget that anything wrought by the grace of the Holy Spirit in the hearts of our separated brethren can be a help to our own edification. Whatever is truly Christian is never contrary to what genuinely belongs to the faith; indeed, it can always bring a deeper realization of the mystery of Christ and the Church.

During Vatican II, Archbishop Flahiff worked mainly behind the scenes. 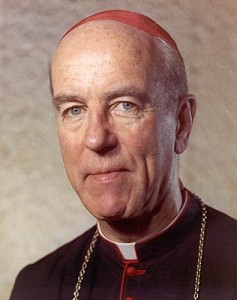 Nevertheless, he contributed to the discussion by Conciliar committees on the apostolate of the laity, on the renewal of religious life, and on Catholic education. After Vatican II, he worked with characteristic skill and gentle leadership to implement the objectives of the Council in his home Archdiocese of Winnipeg, across Canada, and among his fellow Basilians. As Fr. Platt notes, Flahiff “used the documents of the Council constantly in his preaching and in his speeches. It is hard to find a talk or homily of his after 1962 that does not mention the Council.” Flahiff’s address prior to the Basilian Chapter of 1966, entitled “Vatican II and Religious Life,” is a particularly memorable example of Flahiff’s pastoral and educational skill among Basilians. Flahiff was made a Cardinal on 28 March 1969. He had been president of the Canadian Religious Conference (from 1959) and a member of the Synod of Bishops in Rome in 1967. Cardinal Flahiff was increasingly being thrust onto the world stage, but he never forgot his flock in Winnipeg or his Basilian confreres. In 1978, Cardinal Flahiff participated in the conclaves that elected Popes John Paul I and then John Paul II. Soon thereafter, Flahiff’s physical and mental health began to deteriorate. He retired into the Basilian community in Toronto, where he died seven years later. Flahiff was at the same time a brother and another Christ to his confreres. “There was... a clear configuration to Christ in his person,” writes Fr. Platt in his biography of Cardinal Flahiff, Gentle Eminence. George Bernard Cardinal Flahiff is thus remembered as a prince of the Church, a pastor, a brother in religious life, a father of Vatican II, an alter Christus, and a man, after the title of his biography, of humble and gentle eminence. --- Header:  (CNS Photo/ L'Osservatore Romano) Photo: Archdiocese of Winnipeg, archwinnipeg.ca