There were three popes in Vatican City on Friday May 10, 2013: Pope Francis, Pope Emeritus Benedict XVI and Pope Tawadros II. The latter is the head of the Coptic Orthodox Church, the largest Christian church in the Middle East. Pope Tawadros was making his first trip outside Egypt since he was enthroned in November 2012. Friday’s visit between the Coptic leader and Pope Francis also marks the 40th anniversary of the day Pope Paul VI and then-Coptic Pope Shenouda III signed a joint statement, pledging to work together towards reconciliation and unity. In his speech, Pope Tawadros told Pope Francis May 10 should be marked as a day of celebration between the two churches. He also invited Pope Francis to visit Egypt and the Coptic Church, which was founded by St. Mark.   Pope Francis told the Coptic leader the visit strengthened the “ties of friendship and brother that already exist between the See of Peter and the See of Mark. He also thanked Pope Tawadros for his “fraternal charity” towards the Catholic Coptic Church in Egypt and said the institution of the National Council of Christian Churches in Egypt was an important sign that all Christians in the country want to develop a way of working together day to day. 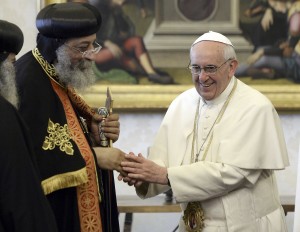 Egypt’s National Council of Christian Churches was created in February 2013 by leaders of the Coptic Orthodox, Catholic Coptic, Greek Orthodox, Anglican and Evangelical churches in Egypt. Pope Tawadros gave his full support in order to speed up the institution of the council. According to the Fides Agency, the information service of the Pontifical Mission Societies, plans for the creation of the council had been underway before Pope Tawadros was elected. Pope Francis also told Pope Tawadros “the sharing of daily sufferings can become an effective instrument of unity." He seemed to be referring to the increase in violence towards Coptic Christians. He also said this idea of unity in suffering could also serve to draw Christians and non-Christians into a closer day to day relationship. After the meeting, the two leaders went to the Redemptoris Mater Chapel in the Apostolic Palace where they led a prayer service that featured Coptic chant and the recitation of the Our Father in Italian.