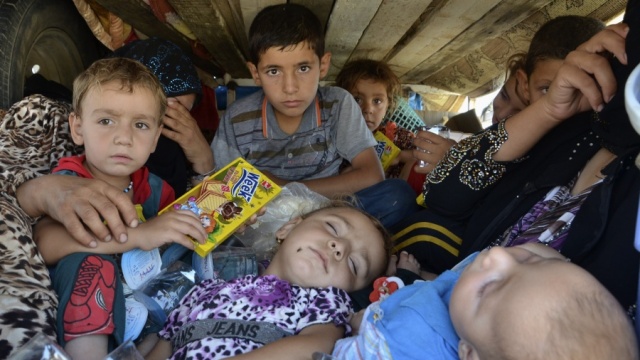 Most of the 80,000 Iraqi Christians forced out of their villages in recent days and weeks have taken refuge around the churches in Ain Kawa, a Christian neighbourhood of Erbil, according to aid officials in Iraq. A member of the Sant'Egidio Community in Iraq reported to the Catholic Near East Welfare Association that Christian churches are working together in Erbil to create and "emergency unit" in order to provide urgent care for displaced Christians. Pope Francis renewed his call for peace, this time asking all Christians to pray for peace. On Friday he appointed Cardinal Fernando Filoni as his special envoy to Iraq. The cardinal will travel to Iraq to meet Church and government officials as well as Christians displaced from their homes. Vatican spokesperson Father Federico Lombardi told journalists Cardinal Filoni will travel to the Iraqi Kurdistan region where most Christians have taken refuge. Cardinal Filoni was the Vatican Nuncio to Jordan and Iraq from 2001 to 2006. He was the only diplomat who remained in Iraq during the 2003 U.S. -led invasion. In an interview with Vatican Radio Cardinal Filoni said it would not be easy to organize his trip because the region he intends to visit is not easy to reach. He said his first goal is to show the pope's solidarity with Iraqi Christians. No date has been set for his visit to Iraq but Fr. Lombardi said Cardinal Filoni would not be joining Pope Francis on his up coming trip to Korea August 13 to 16. *** As the Vatican gears up for the Extraordinary Synod on the Family in October, one Vatican department is bearing the fruit of the 2005 Synod on the Eucharist. The Congregation for Divine Worship and the Sacraments sent a circular letter to episcopal conferences around the world about the Sign of Peace during the Mass. Nine years after the Synod, during which bishops questioned whether the sign of peace should be moved within the liturgy, the congregation determined the sign of peace should stay where it is. However, it should be carried out simply. If for some reason "it is forseen that it will not take place properly" it can be omitted.  The congregation also said the priest should not leave the altar in order to exchange the sign of peace with the congregation, and there should not be any special music selected or played specifically for the exchange of peace.