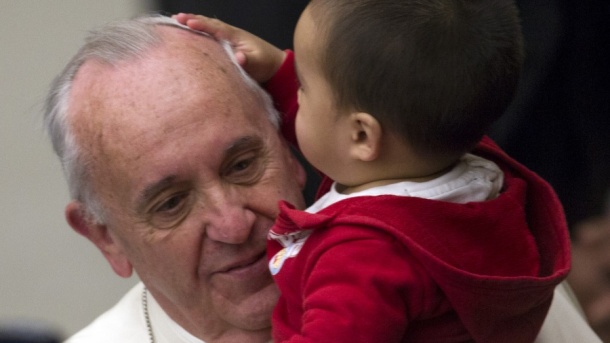 Watch Vatican Connections LIVE on Salt and Light at 8:00pm ET/5:00pm PT
If  the year-in-review articles, videos and talk show segments are anything to go by, 2013 will be remembered not as the year Pope Benedict XVI resigned from the papacy, but the year Pope Francis was elected as his successor.
From the moment Cardinal Jean Louis Tauran stepped onto the loggia of St. Peter’s to announce the name of new pope, a name the Cardinal knew would take everyone by surprise, Benedict XVI and his historic gesture seem to have faded into the mists of  short term memory.
Still, when Pope Francis was named Person of the Year by TIME magazine, critics were quick to say that in the nine months since his unexpected election, the Argentine pontiff done little more put a personable face on the papacy and the church.
On the surface it is easy to see why this claim might be made. There has been no change in any of the church’s core doctrine. Most likely, those doctrines will never change. However, reform has started taking shape at the Vatican and in the Church at large.
The Franciscan Reform
Beginning soon after his election, the pope set in motion a series of changes to the curia and the Vatican’s financial offices. These changes also showed his intent to dive headfirst into a process of reform, starting inside Vatican walls.
Barely a month into his pontificate Pope Francis named eight cardinals to advise him on reform to the Roman Curia. The eight cardinals picked each came from a different continent and were not Curia officials. Pope John Paul II also attempted to reform the curia, focusing on the Vatican bank and the office responsible for the Holy See’s assets. While John Paul II asked several cardinals to form an advisory panel to help with much needed reforms, he picked cardinals already working in the Curia.
Not long after Pope Francis named his advisory panel, he decided he would not be bestowing prelates with the traditional, honorary title “monsignor.” Seemingly insignificant, it represents a huge shift in the power structure within the Vatican. On a practical level, the honorific entitles a prelate to little more than the right to wear a fuscia sash with his black cassock. Yet that little sash can make a world of difference inside the walls. A “monsignor” could, (and some do) pull rank on a regular “father” who doesn’t agree with the monsignor’s directives. Certainly in Italian circles,“monsignor” commands more respect than a simple “father.”
Over the spring and summer months Pope Francis issued several decrees enacting new financial laws, widening the scope of the Financial Information Authority, and created new bodies to study how the Vatican Bank and the Administration of the Patrimony of the Holy See (APSA). ‘Moneyval’ the Council of Europe’s Committee of Experts on the Evaluation of Anti-Money Laundering Measure and the Financing of Terrorism, praised these moves in a Dec 10 report, and urged the Vatican to go even further. In its report, Moneyval said it was encouraging that several Vatican Bank (formally known as the Institute for Works of Religion) accounts had been closed, and suspicious transactions reported. The committee recommended a full inspection of the Vatican Bank without delay.
To help with the necessary evaluations and reforms, several outside firms were contracted in 2013 to study specific Vatican departments. The Promontory Group, a US based, risk-assessment firm was hired to study the Vatican Bank’s assets and currently open accounts. Ernst and Yonge was hired to examine the administrative practices at the Vatican Bank. McKinsey and Company, a us based consulting firm, was hired to evaluate and help streamline the Vatican’s communications outlets. Currently the Press Office, Vatican Radio, Vatican Television, the publishing house, and the Pontifical Council for Social Communication
The most drastic shake up to the Roman Curia was the appointment of a new head of the Synod of Bishops. Archbishop Lorenzo Baldisseri replaced Archbishop Nicola Eterovic, who was made Nuncio to Germany. In the blink of an eye an October 2014 date was set for an extraordinary Synod on the Pastoral Challenges to the Family in the context of Evangelization. A questionnaire was sent to bishops around the world with directions to get feedback from their priests and laypeople in order to finally have a clear picture of what the modern Catholic family looks like. It was the first time such a move was taken.
Finally, in early December the Council of Cardinals announced Pope Francis had decided to create a Commission for the Protection of Minors. The commission was suggested by the eight cardinals.