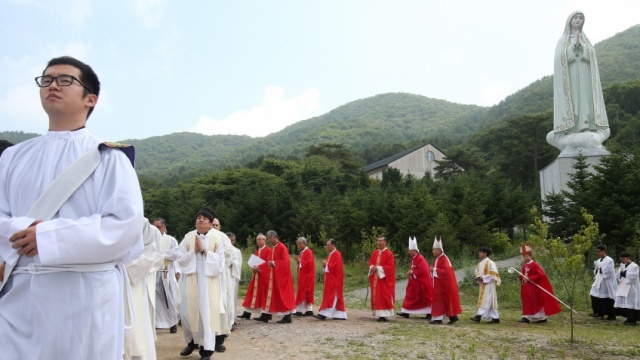 Last summer Pope Francis was sending millions of young people into a frenzy at World Youth Day Rio. This summer he will be attending the Asian Youth Day in Daejon, Korea, It will be the first time a pope has attended this Asian youth event. In truth, Asian Youth Day will be one part of a packed itinerary. Only two of the pope’s 11 scheduled public events are related to the youth event. His other activities include a beatification Mass in Seoul, and visits to two shrines dedicated to Korean Martyrs. Upon arrival in Seoul, Pope Francis will have the usual protocol visits, meeting with Korean President Park Geunhye and civil authorities, as well as the Korean bishops His first full day in Korea will have him celebrating Mass at the World Cup stadium in Daejeon and meet with Asian youth at Solmoe Sanctuary, the shrine dedicated to St. Andrew Kim. The shrine marks the site where St. Andrew Kim was born lived until he was seven years old. His remains are buried in the nearby Cathedral. On August 16 the pope will celebrate a Mass at Seoul’s Gwanghwamun Gate where he will beatify Paul Yun Ji Chung. Chung was a young man from a noble Korean family who discovered Catholicism around 1783 and catechized his family. In 1790 the bishop of Beijing banned Asian Catholics from using Confucian ancestral rites. Chung and his cousin burned the family’s ancestral tablets so they could not be used again. When Chung’s mother died, he gave her a Catholic funeral. News of the Catholic funeral reached the Royal Court. Chung and his cousin were arrested and interrogated but refused to renounce their faith. They were sentenced to death and beheaded. It was nine days before the family received the bodies for burial, but the blood stains were still fresh and there was no decomposition. The faithful soaked handkerchiefs in the still-fresh blood. Reportedly, people who came into contact with these handkerchiefs were miraculously healed. Chung and 123 companions will be beatified by the pope. To close Asian Youth Day, Pope Francis will celebrate Mass at Haemi Castle which was the backdrop of the 1864 Donghak Rebellion. On the final day of the visit Pope Francis will celebrate a Mass for Peace and Reconciliation at Seoul’s Meyongdong Cathedral.