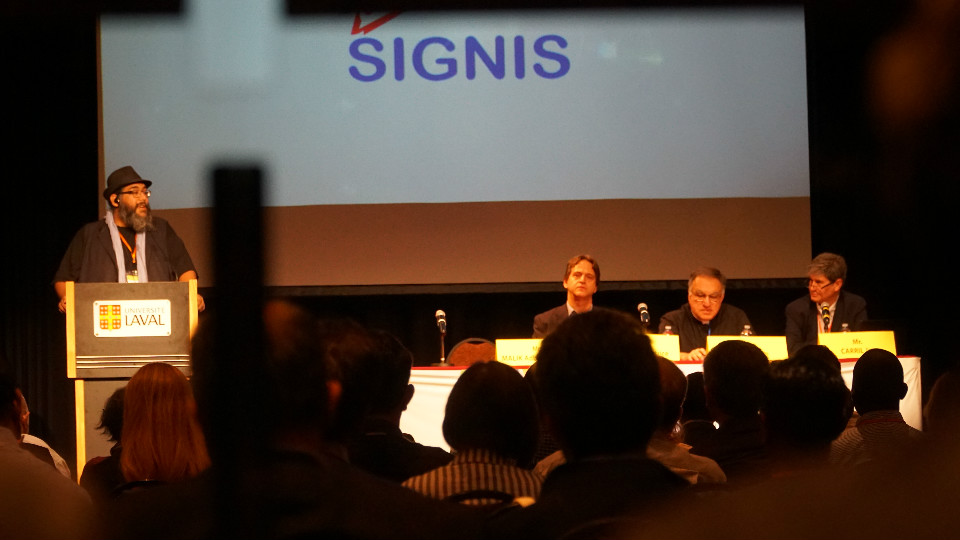 (S+L Photo: Filmmaker Abdul-Rehman Malik (far left), Patrice Brodeur (left), Fr Tom Rosica (middle), and Jaime Carril Rojas (right) discuss "Building peace and hope in a culture of diversity")
The theme for the 2017 SIGNIS World Congress, which took place this week in Quebec City, was "Media for a Culture of Peace: Promoting Stories of Hope." It brought together SIGNIS partners from all over the world to meet, discuss, and strategize ways to effectively tell stories of hope through media. The headliner for the event was acclaimed filmmaker Martin Scorsese, whose moving film "Silence" was screened and discussed. Scorsese offered reflections on his own upbringing and artistic approach in the film. Many participants at the congress were equally interested to hear from Msgr. Lucio Adrian Ruiz, the current Secretary of the Secretariat for Communication at the Vatican. He's the "number 2" in the new dicastery that is responsible for reforming and streamlining the Vatican's various communications entities. The participants at the congress, including Salt + Light, were eager to get an update on the progress that's been made. It is Catholic media outlets after all who disseminate the Pope's message to wider audiences, and they rely heavily on official Vatican communications. Msgr. Ruiz stressed that the reform must be seen as something we can also do in our own institutions. "What they are doing at the Vatican," he said, "can be used as a model for others." "The reform is not only to respond to fiscal responsibility and efficiency, but reflects a whole new way of communicating," he continued. "It requires a rethinking, because the wider culture has completely changed. We don’t have as much TV and radio; we have new means of communications." Complete with a complex, and at times convoluted, powerpoint presentation, Msgr. Ruiz said, "The idea is to build an infrastructure around a basic idea of consistent, efficient communications, keeping in mind the mission of the church, and not forgetting the poor."

(S+L Photo: Msgr. Lucio Adrian Ruiz of the Vatican's Secretariat for Communications addresses the SIGNIS Congress)
Not an easy task. There is still no official timeline for the completion of the reform, nor is there a clear blueprint for what the new infrastructure will look like. The plan as they've drawn it up so far, Ruiz said, will take five years to implement. “We must all face the new challenges of the evolution of communications,” he said during the Q&A. “We have to be able to adjust and to change, even on a daily basis... We cannot try to solve every challenge at once. We have to listen to the various voices in our structures... Listen, see, correct, check, these are all key points we must learn.” “If you want to change something, you can’t just talk about it and do it. It takes time... You need to be committed if you have a vision... And change brings pain, the seed has to die and bear fruit, like the Gospel.” There is no doubt that the Vatican communications entities were in need of reform, especially in light of Francis's broader bureaucratic vision. Catholic media around the world have long suggested that older entities, like Vatican Radio, Vatican Television and L'Osservatore Romano could benefit from an "update." But nothing was mentioned during Ruiz's presentation of the positive contributions of these departments that can continue to benefit the Church's mission. S+L was highly visible at the SIGNIS Congress, as well as the Catholic Press Association later in the week. Fr. Tom Rosica participated in a plenary on "Building Peace and Hope in a World of Cultural and Religious Diversity," a round table discussion exploring how creative communication can contribute to building peace by bringing people from different cultures, traditions and faiths together. He also spoke during a session on how to tell stories of hope and inspiration, especially out of difficult and painful situations, and a third session on how to use blogs, websites and programming that fosters authentic dialogue. 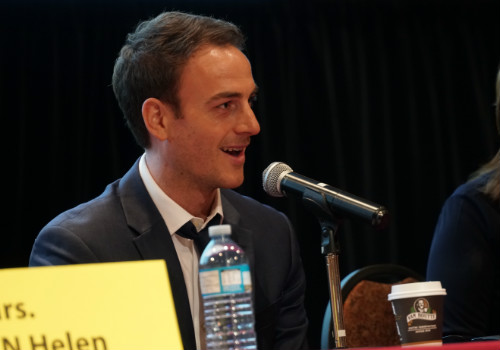 (S+L Photo: Sebastian discusses the 2013 conclave and what he learned about journalism from working with the secular press for the Vatican.)
Marketing Department rep Prevain Devendran sat on a panel entitled "The Medium is the Marketing: New Funding and Marketing Methods for Media." This is a topic of great concern to all Catholic media outlets today, as media is being produced and consumed in rapidly evolving ways. And I sat on a panel on "Journalism," and was asked to speak about what I've learned about Catholic journalism since joining Salt and Light. I offered five lessons for Catholic journalists through the lens of our work before and during the 2013 conclave. I'll be putting those lessons together in another blog in the coming weeks, so look out for that!