Unbound: A Conversation Against Human Trafficking

***UPDATE 9/19: You can now watch the entire program by clicking on the video above.

For most of us, the idea of human trafficking is a foreign one. We are not involved in that industry; we are not involved in the sex industry; we don't know anyone who is or anyone who has been a victim of it. We think that human trafficking for the purposes of prostitution is something that affects young women in places like Thailand. Yet statistics say that as many as 16,000 Canadians are trafficked annually. These are young women, as young as 12 years old, who, believe it or not, live in your community. Many are trafficked by their own families. They are also not the stereotypical young woman in the "not-for-sale" posters you may see at a truck stop off a highway. They are your children's classmates; they are your neighbours’ kids. Since the beginning of his pontificate, Pope Francis has been an outspoken defender and advocate of all those who are marginalized: in a special way for migrants and refugees and, yes, also victims of human trafficking. In January 2019, the Vatican hosted a conference on this topic, and the Migrants and Refugees Section of the Dicastery for Integral Human Development published pastoral guidelines on human trafficking. Here in Canada prostitution laws are under review with the possibility of being completely struck, thus making prostitution a legal activity. All experts agree that liberal prostitution laws only encourage the victimization of women and feed the industry, resulting in more human trafficking. These issues and questions will all be part of a panel discussion, hosted by Deacon Pedro Guevara-Mann, airing on Salt + Light TV, on September 18, 2019, at 8pm ET / 5pm (repeats at 9 pm PT).

Sr. Nancy Brown is a Sister of Charity of Halifax who serves on several Anti-Human Trafficking Committees, including the Working Group on Sexual Exploitation of the Canadian Council of Churches. She was also one of the 200 persons invited from around the world to attend an International Conference on Trafficking in Persons in April 2019 held by the DPIHD at the Vatican. Gwendoline Allison is a lawyer who is co-counsel to the Asian Women Coalition Ending Prostitution and was a witness before the House of Commons Standing Committee on Justice and Human Rights and the Senate Standing Committee on Legal and Constitutional Affairs regarding the Protection of Communities and Exploited Persons Act. She is one of the members of the Anti-Human Trafficking Committee of the Archdiocese of Vancouver. Laura Lam is also a member of the Anti-Human Trafficking Committee formed out of the Archdiocese of Vancouver. She is currently completing her Masters in Immigration and Settlement Studies at Ryerson University in Toronto.

Tune in for Unbound: A Conversation Against Human Trafficking on September 18 at 8 pm ET / 5 pm PT. 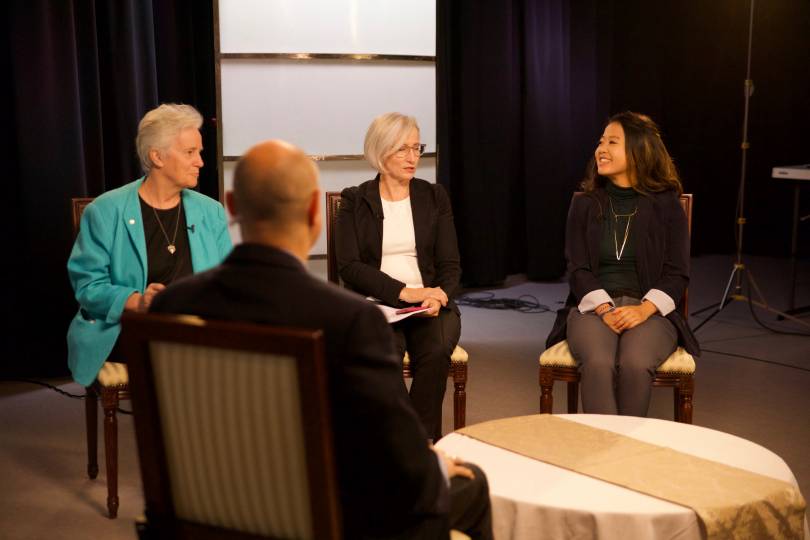