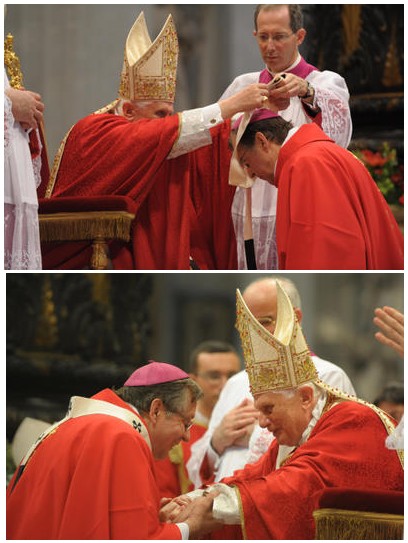 The great feast of Saints Peter and Paul, celebrated on Monday, brings to us every year the Pallium Mass. It is at this Mass that those who have been named Metropolitan Archbishops in the past year receive a special wool stole marked with six crosses indicating their unity with the Holy Father. This year two Canadians are among the 34 Archbishops to receive the Pallium -- Archbishop Pierre-André Fournier of Rimouski, Quebec (right) and Archbishop Michael Miller of Vancouver, British Columbia (bottom left). In a recent L’Osservatore Romano article, Salt + Light CEO, Father Thomas Rosica, explained two significant points about the Pallium:

First is the special relationship of the Metropolitan Archbishops with the Successor of Peter and with Peter himself. It is from the Apostle's tomb that the pallium receives its power as a symbol: those who wear it must remind themselves and others of the intimate and profound bond with Peter and his mission. This should take place in all circumstances of life, from teaching to pastoral guidance, from the celebration of the sacraments to dialogue with the community. The new 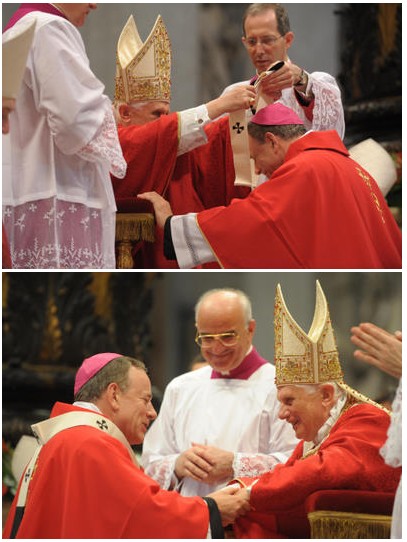 Archbishops are called to take a leading role in building up the Church's unity, which is expressed in the profession of the one faith and in fraternal charity. The sign of the Archbishop's authority is not a scepter or crown, but a circular stole made of lamb's wool, evoke the image that he is, first of all, a shepherd who leads by love. Second, the conferral of the pallium emphasizes the important aspect of the lamb, which offered the wool used for making the pallium. The pallium symbolizes the Lamb of God who took upon himself the sins of the world and gave himself in ransom for humanity. As Lamb and Shepherd, Christ continues to watch over his flock and entrusts it to the care of those who sacramentally represent him. The whiteness of its wool is a call to innocence of life, and with its series of six crosses it reminds us of daily fidelity to the Lord, to the point of martyrdom if necessary. Those who wear the pallium must therefore live an extraordinary and constant communion with the Lord, marked by purity of intention and action and by generosity of service and witness.

Congratulations to Archbishop Fournier and Archbishop Miller!
Let us remember to pray for them -- and for all bishops -- that they may courageously, generously, and lovingly carry out the mission entrusted to them by Christ! - Photos courtesy of L'Osservatore Romano's Servizio Fotografico