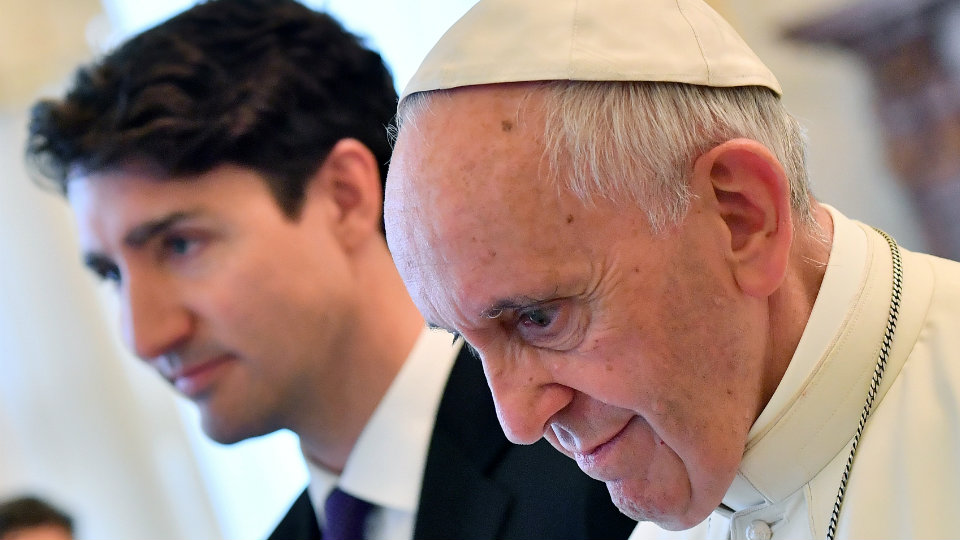 CNS Photo/Paul Haring
Politics make strange bedfellows. At first glance there wouldn’t appear to be any love lost between Trudeau’s Liberal government and the small group of Canadian Catholics who continually voice their opposition to Pope Francis on various blogs and websites. On the contrary, Trudeau embodies a stridently secularist political and social philosophy that clashes with central aspects of traditional Catholic teaching. Catholics unsettled by Pope Francis often assert what they see as their duty to uphold and defend those traditional teachings at all costs. Needless to say, it was quite unexpected and ironic to find a point of convergence between the two, in the recent debate over the Canada Summer Jobs Program. Both groups demonstrate a dogmatic adherence to one particular view of reality that compromises the very principles they seek to defend and advance.

Trudeau’s government demanded applicants for summer jobs funding attest that their core mandate aligns with the Federal Liberals’ views on reproductive rights. Essentially, all applicants had to declare that neither their mission nor their activities were anti-abortionist. Many—including secular Canadians—have pointed out this obvious constitutional infringement on freedom of religion and conscience by the government. The Catholic Church, together with nearly ninety other faith leaders, justifiably refused to “check the box”. Others have filed lawsuits, calling the government’s demand, “ideological coercion.” So, how is it that Trudeau’s government and the Catholic opponents of Pope Francis could possibly stand on common ground? The commonality lies much deeper than any particular issue or policy like the Summer Jobs Program. Both of these groups have fallen into an ideological trap. They project their own particular view of reality onto the rest of us, as if no differing or contrary view had any inherent value. This leads both groups, ironically enough, to misconstrue and compromise the very principles they seek to uphold and advance. Take the Trudeau government’s move to include a values attestation in the Summer Jobs Program. They believe in "reproductive rights and the right to access safe and legal abortions"…okay. But, evidently, they do not believe anyone has the right to believe differently. The government says they received complaints about the activities of a few “pro-life” applicants in the past...okay. But surely preventing certain problematic groups from acquiring federal funds for summer jobs does not warrant imposing a sweeping values test on the Canadian citizenry. The irony here is astounding. The government seeks to promote the modern liberal doctrines of inclusion, equality, and individual freedom. In the process, millions of Canadians are excluded, treated inequitably, and relieved of their constitutional freedom of conscience. In the name of upholding the Charter of Rights and Freedoms they subvert the Charter of Rights and Freedoms. As GK Chesterton would say, “It was like watching a man energetically sawing from the tree the branch he is sitting on.”1 The government’s demand is a tangible expression of what I call “confessional secularism,” a phenomenon sweeping across Canada. It’s the transformation of a declared “neutral” secularism into an ideologically driven belief system, which excludes others, and becomes self-contradictory.

A similar blunder is made by the vehement opponents of Pope Francis in the Catholic community in Canada. These individuals begin with the assumption that their interpretation of the faith is the one, true, orthodox interpretation. All others are inadequate, including that of Pope Francis and millions of other Catholics. Their criticism of Francis stems from, and constantly returns to, the Pope's pastoral approach to divorced and remarried Catholics and the Sacraments outlined in Amoris Laetitia 305. In general, they view the faith as a perfect structure of doctrines which need only be adhered to in order to attain grace and ultimately achieve heaven. They forget Pope Benedict’s foundational teaching that, “Being Christian is not the result of an ethical choice or a lofty idea, but the encounter with an event, a person, which gives life a new horizon and a decisive direction.” (Deus Caritas Est, 1) To them, Pope Francis is highly suspect because he acknowledges ambiguity and mystery. He does not presume to have the answer to every difficult question. He makes mistakes. He lives by the Holy Spirit, who “blows where He wills” (John 3:8), and believes that realities are greater than ideas (Evangelii Gaudium, 231-233). None of this fits into his opponents’ ideological structure of belief and doctrines. Thus, they claim, confusion abounds. But the confusion—like that of Trudeau’s Liberals—is entirely the other way around. By zealously defending what they believe is “orthodoxy,” these Catholics actually misconstrue and compromise the most traditional orthodox teachings. Again the irony is astounding. The core of Christianity is a person, as Benedict said. Francis expresses it in another way:

“All revealed truths derive from the same divine source and are to be believed with the same faith, yet some of them are more important for giving direct expression to the heart of the Gospel. In this basic core, what shines forth is the beauty of the saving love of God made manifest in Jesus Christ who died and rose from the dead… Before all else, the Gospel invites us to respond to the God of love who saves us, to see God in others and to go forth from ourselves to seek the good of others. Under no circumstance can this invitation be obscured! All of the virtues are at the service of this response of love. If this invitation does not radiate forcefully and attractively, the edifice of the Church’s moral teaching risks becoming a house of cards, and this is our greatest risk. It would mean that it is not the Gospel which is being preached, but certain doctrinal or moral points based on specific ideological options.” (Evangelii Gaudium, 34-39)

In his most recent magisterial teaching, Pope Francis defines the ideological trap of his opponents as “contemporary gnosticism.”

“Gnostics think that their explanations can make the entirety of the faith and the Gospel perfectly comprehensible. They absolutize their own theories and force others to submit to their way of thinking… When somebody has an answer for every question, it is a sign that they are not on the right road… God infinitely transcends us; he is full of surprises… Someone who wants everything to be clear and sure presumes to control God’s transcendence.” (Gaudete et Exsultate, 39-41)

Then Francis quotes his first exhortation, Evangelii Gaudium 40, which reads:

“For those who long for a monolithic body of doctrine guarded by all and leaving no room for nuance, this might appear as undesirable and leading to confusion. But in fact such variety serves to bring out and develop different facets of the inexhaustible riches of the Gospel.” (Gaudete et Exsultate, 43)

Canadian citizens, and especially Canadian Catholics, should applaud the Liberal government’s desire to promote healthy secularity across our multicultural society. But we should resist—as the church courageously has—attempts to impose an ideologically driven confessional secularism, which threatens the constitutional freedoms of Canadians who believe differently than the Prime Minister. Likewise, within the Catholic Church, we can applaud the zeal of those Catholics who seek to preserve and defend the Christian faith in a rapidly changing, complex and often hostile society. But it must be real orthodoxy that is defended, and not the closed system of doctrines used as stones to throw at other Catholics (Amoris Laetitia, 305), including the Pope, who live the faith with humility, recognizing God is in every person’s life, operating far beyond the petty and misconstrued systems of security created to extinguish differences. We should never forget what the Second Vatican Council taught in its Pastoral Constitution on the Church in the Modern World that, “no one is allowed to appropriate the Church's authority for his or her opinion.” (Gaudium et Spes, 43)