Totus Tuus - "totally yours" - the apostolic motto for Pope John II inspired by Mother Mary's perfect example, is also the title of the concert gala hosted by Catholic Youth Studio on Sunday, May 8th at Roy Thompson Hall. The Mother's Day gala concert is in honour of Pope John Paul's May 1st beatification and the 150th anniversary of the death of the founder of the Missionary Oblates of Mary Immaculate, Saint Eugene de Mazenod. A doubly joyous occasion!! 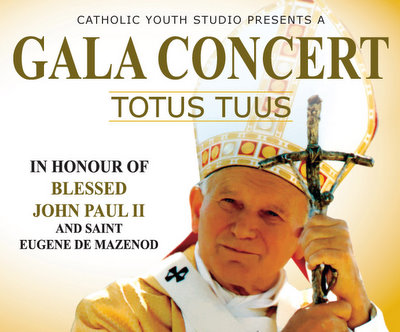 As you many of you already know, Saint Eugene was one of the many saints canonized during Pope John Paul's papacy. There will be over 100 Canadian and international artists participating in the gala concert. The first half of the gala will consist of light, classical and popular hits performed by Jan Lisiecki, Kinga Mitrowska, Christopher Dallo, Kornel Wolak and the Quartetto Gelato. The second half of the concert will reflect on deeper themes presented by the Divine Mercy Oratorio. The first half of the production will be in English, while the second will be in Polish; but, no need to worry for those who don't speak Polish! There will be screens with subtitles to help you along! The Toronto Silver Symphony Orchestra and choir under the direction of Michael Newnham will accompany the artists, it promises to be a memorable celebration. And if you don't know what to get your mum for Mother's Day, what better way to celebrate your love and appreciation than at a gala concert inspired by the perfect example of our Mother Mary, as lived by soon-to-be Blessed Pope John Paul II and Saint Eugene de Mazenod. If you'd like to hear more about the event, you can watch an interview on the Wednesday, April 27th, Daily Perspectives with Father Pawel Ratajczak, OMI and Director of Catholic Youth Studio. Or if you're already convinced, and would like to find out how you can get your ticket(s), visit the 'Totus Tuus' website.