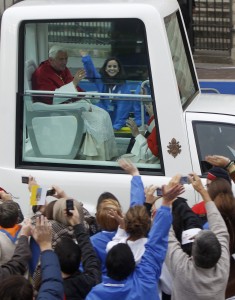 It was one of the most emotional moments of Pope Benedict's visit to Spain. Yet the event itself was overshadowed by the two much larger gatherings of the papal visit: Mass outside the Cathedral of Santiago de Compostela and the dedication of Gaudi's Sagrada Familia Church in Barcelona.
The event I'm referring to is the Holy Father's visit to the Nen Deu Institute in Barcelona. It was the last stop before the airport farewell. The Pope's appearance there was described in the official itinerary as a courtesy visit and simply left at that. What we saw during this visit were some of the most memorable moments of the entire trip. There were truly touching encounters between the Holy Father and the young people who are served by the institute. Nen Deu (which stands for God's Child) was constructed in the late 19th century and is run by the Franciscan Sisters of Barcelona. The institute itself is a social and educational facility that, among many other services, is charged with caring for persons with physical and mental disabilities. During his visit, we got to see a much more personal and affectionate side of our Pope -- one that is rarely seen during his formal addresses to world and religious leaders. Tonight at 8 pm ET, host Kris Dmytrenko takes you back to the Pope's weekend in Spain with an encore presentation of the visit to the Nen Deu Institute. The broadcast also includes a recap of the highlights of the two-day apostolic journey. -CNS Photo