If you follow us on Facebook, you may have noticed that this week's Perspectives question garnered the most attention of all questions to date!
The topic? Yoga. So is yoga a no-go? We’re all wanting to know! 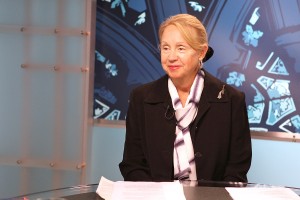 One of the most beautiful things about being Catholic is the ability to dialogue. “The glorious freedom of the children of God” (Rom 8:21) is truly our lot. This is perhaps why Benedict is the most fitting Shepherd for these times. There is no topic he won’t touch! The interview with Peter Seewald released earlier this year gained for us revolutionary access to the mind of a Pope. Like many other things, we often only recognize boundaries once they are fading away from behind us. This episode of Perspectives Weekly was a first in another way. Never have I been prompted to undertake so much background reading! In honour of this contentious episode, I cozied up to the Congregation for the Doctrine of the Faith online like never before. While there, I was delighted to discover a Ratzinger classic; “Letter to the Bishops of the Catholic Church on some Aspects of Christian Meditation”. This document served as a really helpful departure point and I encourage you all to read it. The letter is written in true Ratzinger fashion. It is seasoned, firm and respectful of humanity. By respectful, I meant that it empowers our intellect; our free will. Our now-Pope Benedict gives us room to learn, to process, to discern. This is our Church.   For us Canadians in particular, our reality is a multi-cultural one. No aspect of our public life, particularly our spirituality, is without influences of other faiths, cultures and traditions. There are certainly problems with respect to relativism and “selective” Catholicism because of this reality but there are also many opportunities to more closely examine what it is we believe and why. But back to the issue at hand. Should Catholics practice yoga? Many Catholics have perhaps not even considered that there may be a danger in yoga. The truth be told is that there is a need for caution and a great need for discernment but there is also a danger of some well-meaning individuals binding consciences with more authority than the Church does, which can also be harmful to the Body of Christ. So can yoga, for example, complement Christian prayer? Let's hear what Ratzinger had to say when he was with the CDF:

"To answer this question, one must first of all consider, even if only in a general way, in what does the intimate nature of Christian prayer consist. Then one can see if and how it might be enriched by meditation methods which have been developed in other religions and cultures. However, in order to achieve this, one needs to start with a certain clear premise. Christian prayer is always determined by the structure of the Christian faith, in which the very truth of God and creature shines forth. For this reason, it is defined, properly speaking, as a personal, intimate and profound dialogue between man and God." (Letter to the bishops of the Church on some aspects of Christian meditation, 3).

The most common response to this line of thought is: “but I’m not doing yoga to pray. I’m using yoga to relax, to release stress and to get in shape.” To which Cardinal Ratzinger would respond:

"Human experience shows that the "position and demeanor of the body" also have their influence on the recollection and dispositions of the spirit. This is a fact to which some eastern and western Christian spiritual writers have directed their attention […] In prayer it is the whole man who must enter into relation with God, and so his body should also take up the position most suited to recollection. Such a position can in a symbolic way express the prayer itself, depending on cultures and personal sensibilities. In some aspects, Christians are today becoming more conscious of how one's bodily posture can aid prayer. . Eastern Christian meditation has valued psychophysical symbolism, often absent in western forms of prayer. It can range from a specific bodily posture to the basic life functions, such as breathing or the beating of the heart. The exercise of the "Jesus Prayer," for example, which adapts itself to the natural rhythm of breathing can, at least for a certain time, be of real help to many people. On the other hand, the eastern masters themselves have also noted that not everyone is equally suited to making use of this symbolism, since not everybody is able to pass from the material sign to the spiritual reality that is being sought. Understood in an inadequate and incorrect way, the symbolism can even become an idol and thus an obstacle to the raising up of the spirit to God. To live out in one's prayer the full awareness of one's body as a symbol is even more difficult: it can degenerate into a cult of the body and can lead surreptitiously to considering all bodily sensations as spiritual experiences." (Ibid, 26)

If  you’d like to think about this a bit more, make sure to tune in for this week’s episode of Perspectives Weekly with our guest Moira Noonan. Moira is an author and an international speaker on the Church’s relationship with the New Age Movement. Having just returned to the Church after 30 years of dabbling in New Age modalities, Moira offers us insights on the dangers of the Movement and tells us about her own journey back home. That’s Perspectives tonight at 7 and 11pm ET, 8PM PT.