Tonight on Perspectives: Should persecuted Christians leave or stay in the Middle East?

“Do not let your hearts be troubled. Believe in God, believe also in me. In my Father’s house there are many dwelling-places. If it were not so, would I have told you that I go to prepare a place for you?”
These words from this Sunday’s gospel are perhaps among the most consoling ones found in scripture. How much more consoling they must be to those whose hearts are troubled because of political unrest and/or conflict among religions. 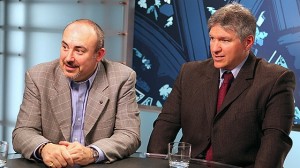 This week on Perspectives, we are joined by Carl Hetu and Michael La Civita of the Catholic Near East Welfare Association (CNEWA). Mr. Hétu and Mr. La Civita speak to us about the plight of Christians in the Middle East. CNEWA is a papal agency for humanitarian and pastoral support. Its reaches extend throughout the Middle East, Northeast Africa, India and Eastern Europe. So what kind of work exactly has CNEWA overseen in the 75-years since its inception? From cnewa.ca:

From training priests to serve the people of God in India to providing clean water systems to war-damaged villages in Lebanon – from providing job opportunities to unemployed Palestinians to caring for orphaned children in Ethiopia – from providing health care to the poor in Iraq to awarding scholarships for Orthodox priests to study in Catholic universities in Rome, CNEWA connects generous North Americans with those in need living in some of the remotest parts of the world.

This week’s Perspectives question is not a straight-forward one. Those of us who have visited the Holy Land have seen glimpses of the reality of the exodus. What would the Holy Land be like without Christians? How can we support them in their decision: whether that decision be tostay or to leave. Tune in tonight to learn more about the work of CNEWA and Christianity in the Middle East. That’s tonight at 7 and 11PM ET, 8PM PT.