Tonight on Perspectives: Part 2 of 2010 in Review

It seems strange to be talking about 2010 when already so much has happened in 2011! 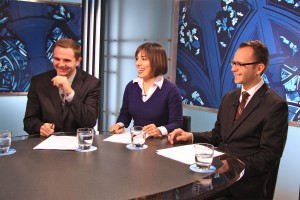 With less than one month under our belts, 2011 has already become a memorable year. This morning, for example, we all learned that our late, beloved John Paul II will be beatified in May, 2011 (on Divine Mercy Sunday, no less). Also, in the person of Archbishop-elect Savio Hon Tai-fai, China will see one of its priests ascend to the highest clerical office in the country's history (Pope Benedict will ordain him as secretary of of the Congregation for the Evangelization of the Peoples on February 5th). This is big news for the Church in China. These are just two major developments of many. Tonight on Perspectives weekly, we will be airing the second of the two-part episode on 2010 in review. Join host Pedro Guevara Mann as he sits with S+L producers Matthew Harrison, Kris Dmytrenko and Vatican correspondent Alicia Ambrosio (who is currently posted in Madrid, Spain) as they take a look at the Church's most memorable moments of 2010 and what they anticipate for 2011. This is an episode you won't want to miss. That's Perspectives weekly, tonight at 7pm ET, 8pm PT.