Tonight on Perspectives: Is it fair that Ontario has a publicly-funded Catholic school system?

When I moved to Ontario from Nova Scotia in 2007, Catholic schools were a totally new concept for me. Until setting up camp in Ontario, those plaid little numbers were relegated to movies and to Britney Spears music videos.
The more I learn about the Ontario Catholic School Board, however, the more I realize that plaid kilts are just the tip of the iceberg. 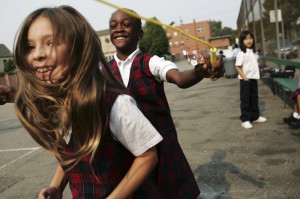 It is no secret that Canada’s Catholic schools have been pumping out remarkably well-rounded individuals for decades- from human rights activists to politicians, fashion designers, writers and news anchors. CTV News anchor, Rosie Del Campo, says that it was her solid Catholic education that gave her the confidence to pursue her career goal, according to a recent York District School Board communiqué. This week, we asked “Is it fair that Ontario has a publicly-funded Catholic school system?” Not only did the resulting Facebook discussion get a bit heated, but it definitely served as a launching pad into some broader questions including quality of education, faith formation and taxation designations. Another point to consider is the question of maintaining the Catholic identity in the midst of an increasingly relativistic, multicultural society. The social climate in Canada at this time is not always easy to reconcile with Catholic teaching. As questions about homosexuality, abortion, and contraception pile up, children and parents alike look to the Catholic school system to fill in the blanks. Some parents, however, are unhappy with the way certain issues are being handled have jumped ship altogether and have opted to home-school or send their kids to a private Catholic school. Recently, my sister, who is a teacher at Collège John Paul II Collegiate outside of Calgary, sent me an article written by Sam Miller, a prominent Cleveland Jewish businessman. Although these stats are American, the basic thrust of the article is not a long-shot for the Canadian Catholic Church.

Why would newspapers carry on a vendetta on one of the most important institutions that we have today in the United States, namely the Catholic Church? Do you know--the Catholic Church educates 2.6 million students everyday at the cost to that Church of 10 billion dollars, and a savings on the other hand to the American taxpayer of 18 billion dollars. The graduates go on to graduate studies at the rate of 92%. The Church has 230 colleges and universities in the U.S. with an enrollment of 700,000 students. The Catholic Church has a non-profit hospital system of 637 hospitals, which account for hospital treatment of 1 out of every 5 people--not just Catholics--in the United States today. […] The Catholic Church is bleeding from self-inflicted wounds. The agony that Catholics have felt and suffered is not necessarily the fault of the Church. You have been hurt by a small number of wayward priests that have probably been weeded out by now. Walk with your shoulders high and you head higher. Be a proud member of the most important non-governmental agency in the United States. Then remember what Jeremiah said: 'Stand by the roads, and look and ask for the ancient paths, where the good way is and walk in it, and find rest for your souls'. Be proud to speak up for your faith with pride and reverence and learn what your Church does for all other religions. Be proud that you're a Catholic.

Indeed, when I reflect on the above words, I do feel a surging sense of pride. The Canadian Catholic Church, like the American Church, is largely responsible for laying down our society's framework and, despite major setbacks throughout the years (abuse scandals included), the work of wielding the vision continues. Tune in tonight for Perspectives at 7 and 11pm ET (8pm PT) as we sit down with Les Miller a religious education co-ordinator at York Catholic District School Board, and Daniel Reidy, an academic co-ordinator at the Dufferin-Peel Catholic School Board, to discuss the battle that is Catholic education in Ontario. Make sure to tune in as they share their vision for engineering the future of our nation. - CNS photo/Greg Tarczynski