This week the Perspectives Weekly team gave in to peer-pressure...in the best possible way. 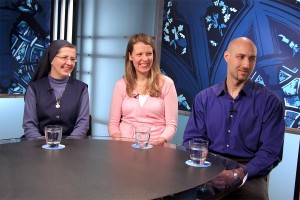 Last week, the Canadian bishops’ newly-released pastoral letter on chastity inspired us to initiate a discussion first on Facebook and then with a panel of young, single people. The discussion and the comments on Facebook became so extensive that we felt obliged to continue the discussion- this time with religious and married people. Does practicing chastity still look the same across the vocations? Are there different steps to attaining chastity depending on your vocation? Fr. Chris Valka, campus minister at the University of Windsor and a guest on this week’s edition of Perspectives Weekly says that chastity serves as an umbrella for a family of virtues. And we would tend to agree. If we make the decision to cultivate the human virtues on an everyday basis, the bigger virtues fall into place as a result of our “training”. This is all with the help of God’s grace of course- but effort is required- no matter your vocation. It reminds me of the popular verses from Corinthians:

Do you not know that the runners in the stadium all run in the race, but only one wins the prize? Run so as to win. Every athlete exercises discipline in every way. They do it to win a perishable crown, but we an imperishable one. Thus I do not run aimlessly; I do not fight as if I were shadowboxing. No, I drive my body and train it, for fear that, after having preached to others, I myself should be disqualified. 1 Corinthians 9: 24-27

Chastity is a virtue which means it is a habit that takes effort to infuse into our very being. I think of the difference between the story of the two bishops. Both viewing a prostitute, one of the bishops turns to his brother and says, "...Shield your eyes!" But the other Bishop cannot look away. He has tears in his eyes because instead of his passions overwhelming him, he sees here true beauty as a child of God. To me, chastity has always been the habit of redeemed vision of the opposite sex. It is to be able to see another as God sees them.

Be sure to join us this week for part 2 of our discussion on chastity. Perspectives Weekly host Pedro Guevara Mann will be joined by two young parents: Mary Anne Brown and Patrick Douglas as well as two religious: Sister Marie-Paul Curley of the Daughters of St. Paul and Basilian Father Chris Valka. That’s Perspectives Weekly on Friday at 7pm ET, 8pm PT. See you then!