Tonight on Perspectives: How can we be in the world and not of the world?

Focolare comes from the Italian word meaning “hearth” or “family fireside”. This is a concept whose absence has been sorely felt in our times. People don’t gather around warmth communally anymore. Since the time of the fireside gatherings we have scrambled and sought ways to replicate this unique-and necessary- source of fellowship and solidarity that the hearth used to unfailingly provide. 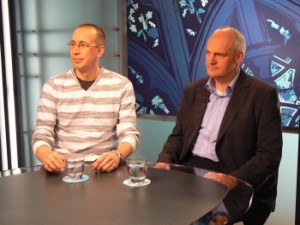 These are the thoughts that struck me during this week’s Perspectives Weekly filming. As I listened to Tim King and Jeroen Van Der Biezen; both members of the Focolare movement, I understood that their work was fulfilling a definite need not only in the Church but in our society that is: community-building in an increasingly fragmented world. Focolare was founded in 1943 during the Second World War when the movement’s founder, Chiara Lubich and her companions began to work among the poor and those in the bomb shelters of Trent in Italy. Today, Focolare is made up of over 100, 000 members stationed in over 182 nations. Once Focolare members are warmed at the hearth of community, they seek to bring that warmth to others. This to me is the definition of community. All of us are called to be out “in the cold” in order to bring our “warmth” to others. Tim King, who is a Central council member of the Focolare Movement says that evangelizing is “first and foremost something you do to yourself…it is not what you say, it’s who you are." This is liberating. We have no power "unless it is given from above” (John 19:11) and we “cannot boast but in the Cross of Christ” (Gal. 6:14). If we are not first converted and our lives do not reflect the inward turning of our hearts to Christ, then the work of evangelizing is in vain. In the words of Blessed John Henry Newman in his prayer “Radiating Christ”:

“Let me preach You without preaching, not by words, but by my example, by the catching force, the sympathetic influence of what I do, the evident fullness of the love my heart bears to You…”

It is no wonder that Mother Teresa and her sisters said this prayer everyday. Join us for this week’s episode of Perspectives weekly where we highlight the work of Focolare as they celebrate their 50th year in North America. That’s tonight on Perspectives 7 and 11PM ET, 8PM PT.