Today's Court of the Gentiles

When Benedict became Pope, he emphasized that the question of God is the first question of all and that this question necessarily involves all of us without distinction. Vatican spokesperson, Jesuit Father Federico Lombardi recalled the Holy Father's firm resolve to dialogue with the unbelieving world since the early dawn of his papacy.
Pope Benedict has repeatedly appealed that a “space for dialogue”, a modern-day court of the Gentiles is a necessity for today. Here, he said, believers and non-believers are able to discuss life’s greatest questions. 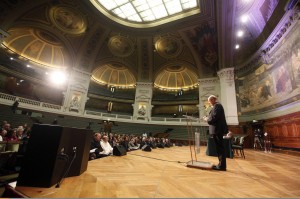 This was precisely the purpose for Pontifical Council for Culture’s newest initiative: aptly named the Court of the Gentiles. The meetings were spread over two-days last week and were held at the UNESCO headquarters in Paris, France. Among those present were diplomats, international officials and representatives of the world of culture. The Holy Father addressed those present via a video message. In his message, he recognized the plight of both non-believers and believers.  "Those of you who are nonbelievers want to take believers to task, demanding from them the witness of a life consistent with what they profess and rejecting any deviation that makes religion inhuman." "You who are believers," he added, "you want to say that the question of God is not a threat to society, it does not threaten human life! ...You have much to say to each other […] I profoundly believe that the meeting between the reality of faith and reason allows man to find himself." The Pope's message, Father Lombardi reflected, "is an impassioned call for the common search for the Absolute, without mutual fears and diffidence." "[It's] a message entirely and only positive, encouraging, to raze the bastions," Fr.Lombardi continued. "The God known in faith is also always a mysterious God, and his worshipers do not feel at all distant from those who truly seek the unknown God. This is what the Pope invites everyone not to be afraid and to travel 'the path toward a new world' together." - Photo credit: CNS photo/Jacky Naegelen, Reuters