Thursday Thoughts for Advent: It Really Is a Wonderful Life 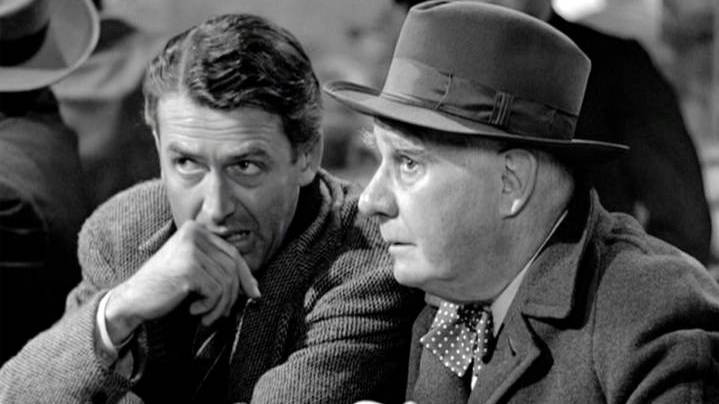 A scene featuring the characters George Bailey and Clarence Odbody in It's A Wonderful Life | Courtesy of Republic Pictures and Paramount Home Media Distribution
Today is the 20th of December, only five days until Christmas. But that’s still five days, so we have this one last chance to share some thoughts together on what is the final Thursday of Advent. With it being December 20, that also means today is the anniversary of the world premiere of the Christmas classic It’s a Wonderful Life. The legendary film premiered in New York City’s Globe Theatre on December 20, 1946. If we’re being honest, it actually opened to pretty mixed reviews but since then has become one of the most famous movies ever made. Now, when talking about It’s a Wonderful Life, many people immediately discuss George Bailey, the main character and star of the film. If not him, maybe they’ll consider the cantankerous villain Mr. Potter or George’s fabulous love interest Mary Hatch. They’re all good choices, but watching the film recently, my focus was drawn elsewhere. To Clarence Odbody. Who’s that? He’s George’s guardian angel. On the one hand, Clarence is a minor character, not on screen until nearly 100 minutes in. On the other hand, you could argue he’s the most influential character in the whole story, making all the difference between George throwing himself off a bridge or surviving to realize what a “wonderful life” he has. However you look at Clarence, there’s little doubt that he plays a role in advancing the story to its beautiful, memorable conclusion. This angel arrives and helps a new dose of goodness break into the world. In that way, he’s a bit like another angel, one found in the Gospel reading of today’s Mass:

In the sixth month the angel Gabriel was sent by God to a town in Galilee called Nazareth, to a virgin engaged to a man whose name was Joseph, of the house of David. The virgin’s name was Mary. And the angel came to her and said, “Greetings, favoured one! The Lord is with you.” (Luke 1:26-28)

At that moment, which we call the Annunciation, this angel shows up in the tiny town of Nazareth, appearing in a seemingly simple way. There are no exultant trumpets declaring the arrival. There are no burning bushes or turbulent storms to flaunt the ultimate power of God. Similar to how Clarence appears to George Bailey looking like just another guy in town, Gabriel’s entrance is relatively understated, simply arriving to a virgin named Mary and saying, “Greetings!” 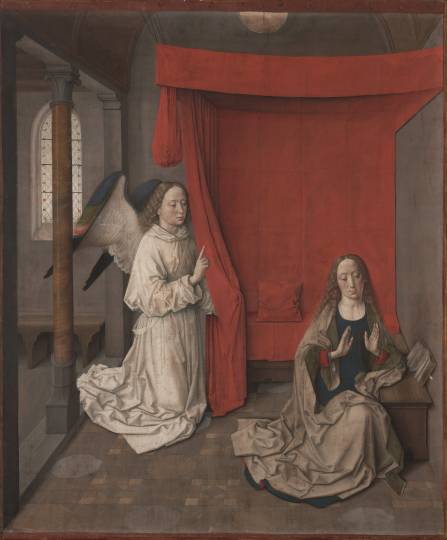 The Annunciation by Dieric Bouts
What Gabriel tells Mary is rather incredible. Their exchange is profound. In the message Gabriel brings, in the response Mary offers, and in the conclusion it leads to on Christmas day. Mary is certainly the star of the moment, but it’s also interesting to consider that as much credit as Mary deservedly receives for her fiat, her “yes,” without the angel there, it just wouldn’t have happened. Sure, if there was only Gabriel, it doesn’t work at all. In the same vein, if there was only Clarence, there’s no It’s a Wonderful Life. Those angels certainly aren’t the main protagonists here, but they do play a key role in helping others to have some vital insight into what’s happening around them. When their angels appear, both George and Mary get to learn and see something new and beautiful for their lives. In both cases, things become substantially more “wonderful,” and the message provided by each angel plays a meaningful role in that process. What does all this mean for us? Well, it probably means we should be on the lookout for angels who might happen to cross our paths. That might sound silly to some, but the truth is that in our faith we believe in angels. We also believe that God wants to communicate with us in our thoughts, prayers, dreams, moments of “divine inspiration,” and, yes, maybe even by sending down an angel or two. Who’s to say how God might choose to reach you, so it’s never a bad idea to be open and ready for it. The Advent season is an interesting time of preparation. Yes, we prepare so we’ll be ready for Christmas but also so that the line of communication will always be ready between us and God. As we take these final days of the season to prepare, then, we might try a little extra hard to be open to God’s voice in whatever way he plans to share it. It’s astounding that the Lord of the universe cares enough to desire a personal connection with you or with me, but it’s true. He does. And when we can remember that, we’re reminded that it really is a wonderful life that we’re living. So prepare. Open your mind and heart. Because you never know when your Gabriel or Clarence might arrive with the message that God wants you to hear.