This week on Perspectives: WAR. Can it be just?

“The Canadian soldier is another breed altogether.”
These were the words from Major Joseph Nonato as he offered us some anecdotes from on the ground in Afghanistan where he served in 2008. 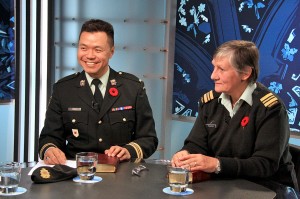 Major Joseph told us about his moments of overwhelming gratitude on the ground. Once, while sitting in a plane with a dozen or so young men in transit, Major Joseph started listening in to these dirt-covered soldiers cradling their weapons.  What is it that young men in their place say to one another in moments like this? To anyone listening in to their conversations, he said, they might mistake the army plane for a university philosophy class. “The guys on the ground in Afghanistan are kids by years but they have a maturity about them. Because of what they’ve seen, they know what is important in life,” Major Joseph said. “You’d be surprised by the reading material in the barracks, these kids are the cream of the crop.” But there are many people who take issue with war. So via Facebook we asked you, our viewers, if war could ever really be just and you had lots to say! On this Friday’s edition of Perspectives we welcome Major Gillian Federico, a chaplain with the Canadian Armed Forces and Major Joseph Nonato, CD an Officer Commanding with the Royal Regiment of Canada. Together with host Pedro Guevara Mann the two will talk about the demands of duty and the call to soldiering. A call which they say, is not for everyone. That’s Perspectives this Friday November 5th at 7pm ET, 8pm PT. Be sure to tune in!