This Is a Story about Love: The Narrator & the Pope 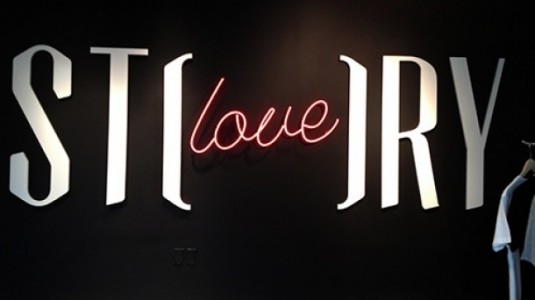 By Brendan Busse, SJ
“Prayer for me is always a prayer full of memory, of recollection, even the memory of my own history or what the Lord has done in his church or in a particular parish. … But above all, I also know that the Lord remembers me. I can forget about him, but I know that he never, ever forgets me. … It is this memory that makes me his son and that makes me a father, too.”
If Francis’ prayer is full of memory it’s a particular kind of memory — it’s a narrative memory. Memory, in this sense, is not a static record of the distant past but rather the active recollection of many events, successes and failures, that tell the story of his own coming to know God as he comes to know how God loves him. In the prayerful examination of our memory we discover the unfolding narrative of our own belovedness. In a prayer full of memory we discover a narrative of faith, hope, and love.
Francis does not seem interested in providing definitive answers. He’s interested in helping us to hear a story. As Flannery O’Connor once quipped, “You tell a story because a statement would be insufficient.” He wants us to hear the story of Jesus, to know him as one would come to know a beloved friend or family member: over time, in laughter and in tears, in waiting rooms and around kitchen tables. He’s not concerned whether you understand Jesus like you would a mathematical sum or a logical problem. He wants us to know first and foremost, as if by heart — before we sort out good from bad, right from wrong, acceptable from unacceptable — that this story, the story of Jesus, the story of the church, and our own story, is a story about love. Story Time II by Paolo.Pace via Flickr
Francis presents his own life, and now his own papacy, as an unfolding narrative, a chapter written into the Story of stories: God’s ongoing creation. He prays narratively and he teaches narratively. In this interview we see a person unfolding himself in an intimate conversation, autobiographically. We see a self-proclaimed sinner. A young man looking for community in religious life. A failed leader learning from mistakes. A tragic character persistently drawn ahead by grace. Mercy-ing and choosing God. A story of love.
Francis is also a man with a taste for the stories and experiences of others: during an extended diversion mid-interview he rattles off a litany of artists, musicians, filmmakers, novelists and poets who inspire him. He summarizes his tastes saying, “In general I love tragic artists, especially classical ones.”
Curiously, Francis occasionally presents himself as a tragic figure — acknowledging his past mistakes, self-identifying as a called sinner, etc. But it is clear in everything he says that his own narrative is shot through with grace. Perhaps his story is not only one of love but also of redemption. If not for his seemingly bottomless joy I might say that he could be a character in one of Flannery O’Connor’s short stories — haunted by a merciful Christ, a redeemed sinner in territory largely held by the devil. That he has had a portion of one lung removed as a result of childhood illness would only add to my case.
In any case, the interview itself unfolds like a sublime screenplay. The editors at America Magazine prudently include Fr. Spadaro’s own narration of the inner movements that guided each series of questions and each cluster of Francis’ responses. There are repeated references to “thoughtful silences.” The net effect lets us feel as if we’ve been invited onto the couch alongside these two men, invited into a place and a period of time, to listen to a story unfolding. In both content and form this is a remarkable interview.
This is no interrogation room. This is no dissertation defence. This is no cross-examination. This is a man in love with Jesus Christ, his church, and his humanity. This is a man working to put words to his own experience of God. This is both autobiographical and catechetical. This is dialogic. Perhaps most moving is how the reader can play a part in this conversation. The narrative form effectively invites us into our own memory, into our own sense of God’s work in our lives. It’s both informative and encouraging. Of course, Pope Francis says it best:
“I have a dogmatic certainty: God is in every person’s life. God is in everyone’s life. Even if the life of a person has been a disaster, even if it is destroyed by vices, drugs or anything else—God is in this person’s life. You can, you must try to seek God in every human life. Although the life of a person is a land full of thorns and weeds, there is always a space in which the good seed can grow. You have to trust God.”
---
Cover Photo: Therea Quintanilla via Flickr
Photo: Paulo.Pace via Flickr